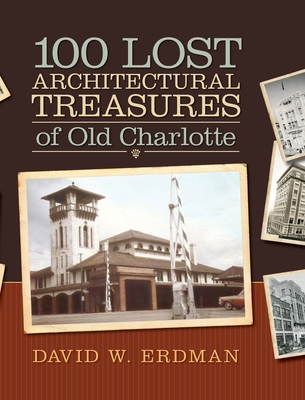 In its ascent to becoming a top-20 city, Charlotte, North Carolina, has demolished one-by-one a greater proportion of its historic buildings than were lost to Chicago in the great Chicago Fire or to San Francisco in the 1906 earthquake.

Through photographs and brief essays, 100 Lost Architectural Treasures of Old Charlotte brings back 100 buildings that came and went as Charlotte's population burgeoned from being the nation's 60th largest city in 1970 to being the 17th largest city now. Viewing this cavalcade of lost architectural treasures provides context for the industrial and sociological forces that powered this remarkable, still-growing city to its present heights.

Seeing Charlotte's past through pictures of Old Charlotte's lost buildings helps explain the Charlotte Paradox - how did Charlotte become a highly successful city while lacking an obvious geographic reason for its success? Whether the reason was gold mining, textile manufacturing, interstate banking, or connecting the world as an airline hub, the common thread is Charlotte's serial reinvention of itself in each new era. Seeing the city develop over the decades, as these photographs portray, illuminates that history and helps us to understand it.