Easy Belize: How to Live, Retire, Work and Buy Property in Belize, the English Sp (Paperback) 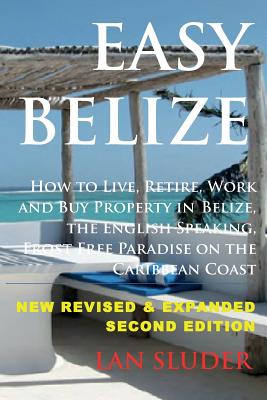 EASY BELIZE How to Live, Retire, Work and Buy Property in Belize, the English Speaking, Frost Free Paradise on the Caribbean Coast by Lan Sluder is the complete guide for anyone considering relocating or retiring to Belize, and for anyone thinking of buying property or building a home in Belize.This is the fully updated, revised and expanded Second Edition for 2017. In 40 chapters, 460 pages and 170,000 words, with dozens of photographs and maps, it covers everything you need to know: Where are the best areas of Belize to live?Can you still find affordable beachfront land in Belize?What do things cost in Belize?How to find the best values on real estateFacts on health care in Belize Truth about safety and securityWhat pitfalls and problems should you avoid?Options for residencyHow much per month do you need to live in Belize?Tax savings in BelizeQualified Retired Persons (QRP) programHow to stretch your dollars in Belize. While this books is primarily a guide for those thinking about retiring, relocating or buying property in Belize, it also includes comprehensive information on hotels and restaurants. It also covers what to do and see in Belize, including diving, snorkeling, boating, fishing, caving, visiting Maya sites and other adventures. This makes Easy Belize handy for your "check-it-out" scouting trip to Belize.Easy Belize provides detailed information on all the major areas of Belize, whether inland or on the coast and cayes: Corozal Town and Corozal District; the islands of Belize including Ambergris Caye (San Pedro) and Caye Caulker and the small offshore cayes; Belmopan City, San Ignacio/Santa Elena and Benque Viejo in Cayo District; Dangriga, Hopkins and Placencia in Stann Creek District; the Punta Gorda and Maya villages areas in Toledo District; and Belize City and rural Belize District.Lan Sluder has been reporting on Belize for 25 years. He is the author of more than a dozen books and ebooks on the country, including Fodor's Belize, Living Abroad in Belize and San Pedro Cool.

Lan Sluder is an old Belize hand, having been reporting on and writing about Belize since 1991. The author of more than 15 books and ebooks on Belize, Sluder has helped many people plan the adventure of a lifetime in this fascinating little English-speaking country on the Caribbean Coast of Central America. Among Lan Sluder's Belize books, besides Easy Belize (original First Edition and completely revised and expanded Second Edition), are Fodor's Belize, Living Abroad in Belize, Adapter Kit: Belize, San Pedro Cool, Belize Islands Guide and Belize First Guide to Mainland Belize. Sluder is also founder, editor and publisher of Belize First Magazine - a web edition is at http: //www.belizefirst.com. In addition to his books on Belize, Sluder has authored several books on Asheville and the North Carolina mountains, including Amazing Asheville, Asheville Relocation, Retirement and Visitor Guide and Moving to the Mountains. He wrote Frommer's Best Beach Vacations: Carolinas and Georgia and co-authored Fodor's The Carolinas & Georgia. In addition, he has written books on the game of bridge, Play Bridge Today, a book on vintage Rolls-Royce and Bentley motorcars, Buy a Classic Rolls-Royce or Bentley and a book on 25 Great Private Eyes in Books, Movies and TV: Their Dives, Digs, Drives and Drinks. A former business newspaper editor and reporter in New Orleans, where he won a number of Press Club awards, Sluder has contributed articles on travel, retirement and business subjects to media around the world, including The New York Times, Chicago Tribune, Miami Herald, Where to Retire, Canada's Globe and Mail, Charlotte Observer, Bangkok Post, The Tico Times, Newsday, TravelChannel.com and Caribbean Travel & Life.