"An Emotional Abortion or Emotionally Aborted?": i.e. ABORTION: A failure to develop to completion or maturity: The premature ending or abandonment of (Paperback) 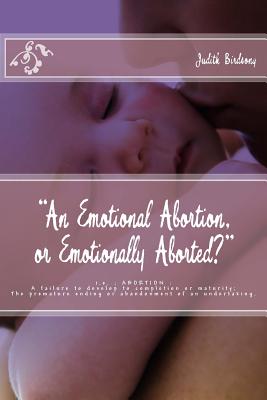 "An Emotional Abortion, or Emotionally Aborted?" is an intimate testimony of the aftermath in the lives of Judith Birdsong, and her subsequent children, following the Abortion of her first pregnancy in 1973. As you read, you will see how the emotional abortion Judith endured, caused her to emotionally abort her three subsequent children, through grief, guilt, fear, and the failure to bond as a mother, bringing about the unconscious emotional abandonment of her three children. Abortion labeled the path that led Judith Birdsong on a pain filled journey, throughout 40 years of her life. It seemed there was always a "Black Cloud" storming over her life continually. There was no umbrella of protection to cover her, until she discovered the origin of her unrealized grief. In this book you will read an intimate testimony of the emotional devastation, and overwhelming destruction that not only befell the life of Judith Birdsong after her abortion, but contaminated and alienated the lives of her husband, her three children, her surrounding family, and her friends as well. According to the Guttmacher Institute, 43% of all women in the U.S. will have at least one abortion by the age of 45. If you have suffered the side effects or symptoms of an emotional abortion, reading this book will help you to realize you are not alone. There is hope, healing, and forgiveness for the post abortive woman or man who is willing to climb the steps that lead away from the "Abortion" labeled path. You can choose to change the course, of a grief and pain filled path, and enter the narrow walkway of forgiveness and freedom.

Judith Birdsong is a widow and the mother of two sons and a daughter, with six grandchildren. She was a post abortive woman who emotionally aborted her three children, and was transformed into a woman who had an abortion and loves her children. Forty years passed before Judith could admit and talk about her abortion. Meanwhile, because of a wounded heart, she emotionally aborted her subsequent children, her husband and other family members. She wants to share her experiences, hoping to help other post abortive women and men realize that there is healing for their grieving and broken hearts.