Learning in the Fast Lane: The Past, Present, and Future of Advanced Placement (Hardcover) 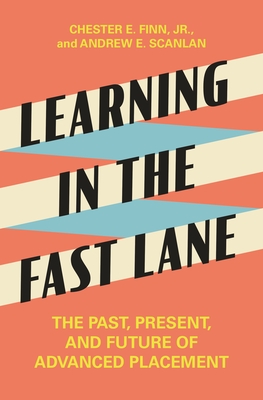 By Chester E. Finn, Andrew E. Scanlan
This Book Is Not Sold Online - Inquire In Store

The first book to tell the story of the Advanced Placement program, the gold standard for academic rigor in American high schools

The Advanced Placement program stands as the foremost source of college-level academics for millions of high school students in the United States and beyond. More than 22,000 schools now participate in it, across nearly forty subjects, from Latin and art to calculus and computer science. Yet remarkably little has been known about how this nongovernmental program became one of the greatest success stories in K-12 education--until now. In Learning in the Fast Lane, Chester Finn and Andrew Scanlan, two of the country's most respected education analysts, offer a groundbreaking account of one of the most important educational initiatives of our time. Learning in the Fast Lane traces the story of AP from its mid-twentieth-century origins as a niche benefit for privileged students to its emergence as a springboard to college for high schoolers nationwide, including hundreds of thousands of disadvantaged youth. Today, AP not only opens new intellectual horizons for smart teenagers, but also strengthens school ratings, attracts topflight teachers, and draws support from philanthropists, reformers, and policymakers. At the same time, it faces numerous challenges, including rival programs, curriculum wars, charges of elitism, the misgivings of influential universities, and the difficulty of infusing rigor into schools that lack it. In today's polarized climate, can AP maintain its lofty standards and surmount the problems that have sunk so many other bold education ventures? Richly documented and thoroughly accessible, Learning in the Fast Lane is a must-read for anyone with a stake in the American school system.

Chester E. Finn, Jr., is a distinguished senior fellow and president emeritus at the Thomas B. Fordham Institute and a senior fellow at Stanford University's Hoover Institution. He is the author or coauthor of many books, including Exam Schools: Inside America's Most Selective Public High Schools and Troublemaker: A Personal History of School Reform since Sputnik (both Princeton). Andrew E. Scanlan is a research and policy associate at the Thomas B. Fordham Institute.