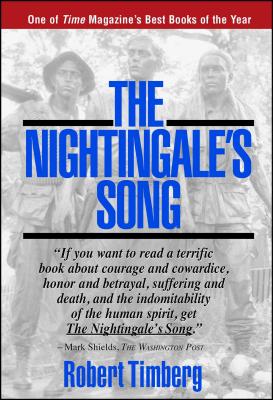 Robert Timberg weaves together the lives of Annapolis graduates John McCain, James Webb, Oliver North, Robert McFarlane, and John Poindexter to reveal how the Vietnam War continues to haunt America. Casting all five men as metaphors for a legion of well-meaning if ill-starred warriors, Timberg probes the fault line between those who fought the war and those who used money, wit, and connections to avoid battle. A riveting tale that illuminates the flip side of the fabled Vietnam generation -- those who went.

Robert Timberg is the author of The Nightingale's Song and John McCain, An American Odyssey. He served with the First Marine Division in South Vietnam from March 1966 to February 1967. He has worked at The Baltimore Sun for three decades as a reporter, editor and White House correspondent. Currently deputy chief of the Sun's Washington bureau, he lives in Bethesda, Md.

Mark Shields The Washington Post If you want to read a terrific book about courage and cowardice, honor and betrayal, suffering and death, and the indomitability of the human spirit, get The Nightingale's Song.

Mike Barnicle The Boston Globe This is an amazing piece of work that could make you cry over descriptions of bravery so bold and so big...It is about the soul of a nation...This is a stunning book.

David Halberstam author of The Best and the Brightest The Nightingale's Song... has an almost hypnotic authority all its own and belongs on the same shelf as those classics of the Vietnam War, Neil Sheehan's A Bright Shining Lie, Philip Caputo's A Rumor of War, and Harold G. Moore and Joseph Galloway's We Were Soldiers Once...and Young.