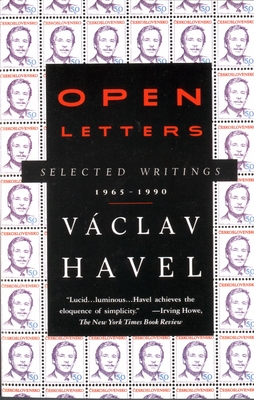 By Vaclav Havel
$16.95
Unavailable, Out of Stock, or Out of Print

Spanning twenty-five years, this historic collection of writings shows Vaclav Havel's evolution from a modestly known playwright who had the courage to advise and criticize Czechoslovakia's leaders to a newly elected president whose first address to his fellow citizens begins, "I assume you did not propose me for this office so that I, too, would lie to you." Some of the pieces in Open Letters, such as "Dear Dr. Husak" and the essay "The Power of the Powerless," are by now almost legendary for their influence on a generation of Eastern European dissidents; others, such as some of Havel's prison correspondence and his private letter to Alexander Dubcek, appear in English for the first time. All of them bear the unmistakable imprint of Havel's intellectual rigor, moral conviction, and unassuming eloquence, while standing as important additions to the world's literature of conscience.

Václav Havel was born in Czechoslovakia in 1936. His plays have been produced around the world, and he is the author of many influential essays on totalitarianism and dissent. He was a founding spokesman for Charter 77 and served as president of the Czech Republic until 2003. He died in 2011 at the age of 75.

"Brilliant and perceptive analyses...of the abuse of power by bureaucracies driven by cynical self-interest." -- Boston Globe

"An inspiring collection...a fitting tribute to a cultural and political hero, and a valuable resource for anyone seeking reassurance that the principles of democracy are still cherished in our time." -- Kirkus Reviews

"Havel's essays...show a complex political and moral sensibility. [Writing] with wonderful clarity and directness, he has a rare gift for metaphor and example. He can capture, with a phrase or a word, the dishonesty of an era."