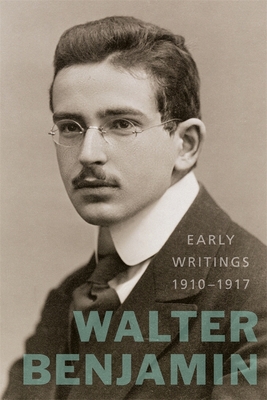 By Benjamin
This Book Is Not Sold Online - Inquire In Store

Walter Benjamin became a published writer at the age of seventeen. Yet the first stirrings of this most original of critical minds--penned during the years in which he transformed himself from the comfortable son of a haute-bourgeois German Jewish family into the nomadic, uncompromising philosopher-critic we have since come to appreciate--have until now remained largely unavailable in English. Early Writings, 1910-1917 rectifies this situation, documenting the formative intellectual experiences of one of the twentieth century's most resolutely independent thinkers.

Here we see the young Benjamin in his various roles as moralist, cultural critic, school reformer, and poet-philosopher. The diversity of interest and profundity of thought characteristic of his better-known work from the 1920s and 30s are already in evidence, as we witness the emergence of critical projects that would occupy Benjamin throughout his intellectual career: the role of the present in historical remembrance, the relationship of the intellectual to political action, the idea of truth in works of art, and the investigation of language as the veiled medium of experience. Even at this early stage, a recognizably Benjaminian way of thinking comes into view--a daring, boundary-crossing enterprise that does away with classical antitheses in favor of the relentlessly-seeking critical consciousness that produced the groundbreaking works of his later years. With the publication of these early writings, our portrait of one of the most significant intellects of the twentieth century edges closer to completion.