Saving Persuasion: A Defense of Rhetoric and Judgment (Paperback) 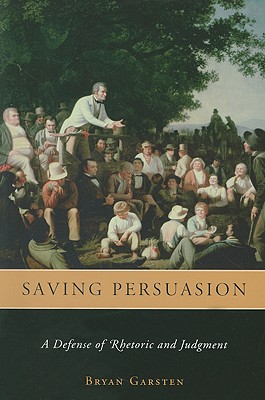 In today's increasingly polarized political landscape it seems that fewer and fewer citizens hold out hope of persuading one another. Even among those who have not given up on persuasion, few will admit to practicing the art of persuasion known as rhetoric. To describe political speech as rhetoric today is to accuse it of being superficial or manipulative. In Saving Persuasion, Bryan Garsten uncovers the early modern origins of this suspicious attitude toward rhetoric and seeks to loosen its grip on contemporary political theory. Revealing how deeply concerns about rhetorical speech shaped both ancient and modern political thought, he argues that the artful practice of persuasion ought to be viewed as a crucial part of democratic politics. He provocatively suggests that the aspects of rhetoric that seem most dangerous--the appeals to emotion, religious values, and the concrete commitments and identities of particular communities--are also those which can draw out citizens' capacity for good judgment. Against theorists who advocate a rationalized ideal of deliberation aimed at consensus, Garsten argues that a controversial politics of partiality and passion can produce a more engaged and more deliberative kind of democratic discourse.