We Got the Neutron Bomb: The Untold Story of L.A. Punk (Paperback) 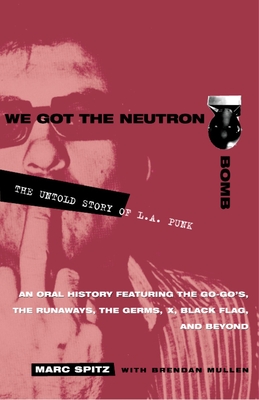 Taking us back to late ’70s and early ’80s Hollywood—pre-crack, pre-AIDS, pre-Reagan—We Got the Neutron Bomb re-creates word for word the rage, intensity, and anarchic glory of the Los Angeles punk scene, straight from the mouths of the scenesters, zinesters, groupies, filmmakers, and musicians who were there.

“The Runaways were rebels, all of us were. And a lot of people looked up to us. It helped a lot of kids who had very mediocre, uneventful, unhappy lives. It gave them something to hold on to.” —Cherie Currie

“The objective was to create something for our own personal satisfaction, because everything in our youthful and limited opinion sucked, and we knew better.” —John Doe

“The Masque was like Heaven and Hell all rolled into one. It was a bomb shelter, a basement. It was so amazing, such a dive ... but it was our dive.” —Hellin Killer

“At least fifty punks were living at the Canterbury. You’d walk into the courtyard and there’d be a dozen different punk songs all playing at the same time. It was an incredible environment.” —Belinda Carlisle

Assembled from exhaustive interviews, We Got the Neutron Bomb tells the authentically gritty stories of bands like the Runaways, the Germs, X, the Screamers, Black Flag, and the Circle Jerks—their rise, their fall, and their undeniable influence on the rock ’n’ roll of today.

Marc Spitz's writing on rock 'n' roll and popular culture has appeared in Spin, The New York Times, Maxim, Nylon, Blender, and Uncut (UK). He is the author of How Soon Is Never?; Too Much, Too Late; and Nobody Likes You: Inside the Turbulent Life, Times, and Music of Green Day and coauthor with Brendan Mullen of We Got the Neutron Bomb: The Untold Story of L.A. Punk.

Brendan Mullen founded the Masque, the Hollywood underground club/rehearsal space hailed as the birthplace of the Los Angeles and Orange County punk scenes. He was a contributing writer for LA Weekly until his death in 2009.

“When Gillian McCain and I wrote Please Kill Me, a number of people asked us, ‘What about the L.A. punk scene?’ We said ‘That’s another book.’ And now Marc Spitz and Brendan Mullen have finally written it. It’s about time.”
—Legs McNeil