A Poverty of Thoughts (Paperback) 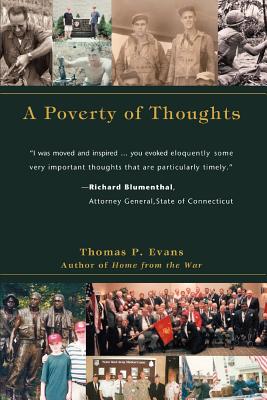 Tom Evans grew up in Connecticut and enlisted in the Marine Corps at 17 after high school. In 1967 he served in a Marine infantry platoon in the 'Walking Dead' battalion, so named because it had the highest casualty rate of any Marine unit. At 19 he was promoted to sergeant and put in charge of a 15-man mortar section. He is a survivor of the bloodiest single-day battle of the Vietnam War.

With the war seemingly behind him, Evans suffered a PTSD breakdown in 1989. A psychiatrist's notes read-'Presently on major tranquilizer. Patient offers flat affect. No spontaneous conversation. Sits motionless, sluggish mental mechanisms. Suffers a poverty of thoughts.'

In 1994, while riding on a float in his first Memorial Day parade, an older woman in the crowd yelled 'Thank you ' Tears came to his eyes as he realized that was the first time in 27 years anybody had thanked him for his Vietnam service. Evans went home that night and, at age 46, began to write about the war and how it had affected his life. He has been writing ever since.