A Truth to Lie For: An Elena Standish Novel (Hardcover) 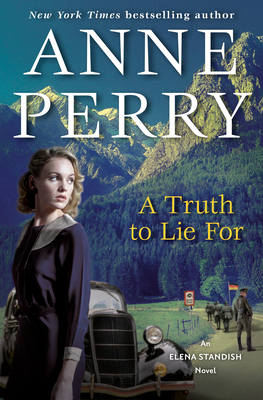 This is book number 4 in the Elena Standish series.

A lethal new weapon endangers all of Europe—unless Elena Standish can rescue an ingenious scientist from Hitler’s clutches—in this action-packed mystery by bestselling author Anne Perry.

It is the summer of 1934, and Hitler is nearing the summit of supreme power in Germany, his eyes set on European domination. When Britain’s MI6 gets word that a pair of German scientists have made breakthroughs in germ warfare, they send Elena Standish on a dangerous mission to get one of them out of Germany before he’s forced to share his knowledge and its devastating power with Hitler’s elite.

But the British soon learn that it’s more than just time that Elena is working against. The new head of Germany’s germ warfare division is an old enemy of Elena’s grandfather Lucas, the former head of MI6. And he’s bent on using any means at his disposal to avenge his defeat at Lucas’s hands twenty years before.

What starts as an effort to save Europe from the devastation of disease soon becomes an intensely personal fight. As Elena and the scientist make their way across Germany, from Berlin to Bavaria and beyond, they confront not only the Gestapo but also a ragtag group of unpredictable Nazi supporters. Elena finds her every decision challenged in this compelling thriller that takes a searing look at what it means to do what’s right in a world rife with so much evil.

Anne Perry is the bestselling author of two acclaimed series set in Victorian England: the William Monk novels, including Dark Tide Rising and An Echo of Murder, and the Charlotte and Thomas Pitt novels, including Murder on the Serpentine and Treachery at Lancaster Gate. She is also the author of a series featuring Charlotte and Thomas Pitt’s son, Daniel, including Three Debts Paid and Death with a Double Edge, as well as the new Elena Standish series, including A Darker Reality and A Question of Betrayal; a series of five World War I novels; nineteen holiday novels (most recently A Christmas Legacy); and a historical novel, The Sheen on the Silk, set in the Ottoman Empire. She lives in Los Angeles.

Praise for A Darker Reality

“A good historical mystery is like a balancing act [and Anne Perry] gets the balance just right. It would be easy to believe that Elena Standish really did exist, and that the books are actual biographical stories. Perry proves once again why she is among the top writers of historical mysteries.”—Booklist

“A Darker Reality is full of Anne Perry’s trademark moral quandaries and historical detail that instantly brings credibility to the story but also makes it feel like an actual slice of world history.”—Bookreporter

“Anne Perry’s lush descriptions of the magnificent home and luxurious setting help settle readers into a comfortable niche. . . . [She leads us] on a steady march, keenly analyzing suspects, subjecting readers to palm-sweating confrontations with Agent Elena in disguise.”—Historical Novel Society

“Another sharply and well-written story focusing on the great character of Elena Standish and her secret work. The story keeps the reader engaged throughout the novel, with twists and turns.”—Red Carpet Crash

“A Darker Reality is a terrific installment. . . . [It’s an] absorbing and calculating thriller/mystery that grabs the reader from the first page. Readers will look forward to more Elena Standish adventures as she continues her passage through intrigue and adventure.”—Great Mysteries and Thrillers

“There can be little denying that Anne Perry is a prolific storyteller and mystery writer. She has written a number of beloved mystery series and Elena Standish is just the latest series of hers that has quickly gained in popularity. . . . If you are a fan of Perry then you will no doubt find lots to love in this one.”—The Lit Bitch