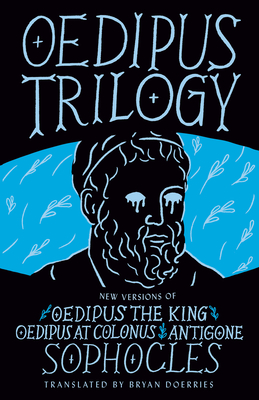 By Sophocles, Bryan Doerries (Translated by)
$17.00

Here are Oedipus the King, Oedipus at Colonus, and Antigone in fresh new versions for contemporary readers and audiences. Each has been the basis for groundbreaking theatrical performances by Theater of War Productions, in which actors present dramatic readings, followed by town hall-style discussions. These forums are designed to confront social issues by evoking raw, personal reactions to themes highlighted in the plays.

The Oedipus Project is an innovative digital initiative that presents scenes from Oedipus the King as a catalyst for frank and restorative online conversations about the impact of the COVID-19 pandemic on diverse communities. First performed in 429 BC during the time of a plague that killed one-third of the Athenian population, it is a story of arrogant leadership, ignored prophecy, and a pestilence that ravages the city of Thebes—a story that is as relevant now as it was in its own time.

The Oedipus at Colonus Project presents readings of scenes from Sophocles’ final play, Oedipus at Colonus, for powerful, community-driven conversations about homelessness, the immigration and refugee crises, and the challenges of eldercare during and after the pandemic.

Antigone in Ferguson is a pioneering project that fuses dramatic readings from Antigone with live choral music, culminating in powerful, healing discussions about race and social justice. Antigone in Ferguson was conceived in the wake of Michael Brown's death in 2014, through a collaboration between Theater of War Productions and community members from Ferguson, Missouri, and premiered at Normandy High School, Michael Brown's alma mater.

BRYAN DOERRIES is a New York-based writer, director, and translator who currently serves as artistic director for Theater of War Productions, a company that presents dramatic readings of seminal plays and texts to frame community conversations about pressing issues of public health and social justice. A self-described evangelist for ancient stories and their relevance to our lives today, Doerries uses age-old approaches to help individuals and communities heal from trauma and loss. He is the author of The Theater of War: What Ancient Greek Tragedies Can Teach Us Today; All That You've Seen Here Is God, four plays by Aeschylus and Sophocles; and The Odyssey of Sergeant Jack Brennan, a graphic novelization of Homer's Odyssey, told from the point of view of a US Marine returning home from Afghanistan. Among his awards, he has received an honorary Doctorate of Humane Letters from Kenyon College and was named Public Artist in Residence for the City of New York.

“Bryan has brought these ancient plays to searing and vital life. Having performed these translations at a time of great global upheaval, I witnessed firsthand the catharsis it served for so many audience members. He has connected these plays to the immediacy of the present moment, bridging the vast stretch of time from when they were first performed (and received) to now.” —Oscar Isaac

“In these fresh renderings of Sophocles’ Theban plays, Doerries unearths the impulses beneath the ancient text by stripping back its encrusted surface to reveal the urgent core.” —Peter Brook

“The work of Theater of War Productions, and the Oedipus Trilogy specifically, shows that the stories, conflicts, and issues that brought people to ancient amphitheaters are just as relevant today. As an actor, it’s a rich work to explore and bring to life. As a public servant, it's an incredible way to engage people artistically, intellectually, and civically. As a reader, it's an essential, powerful piece.” —Jumaane D. Williams, New York City Public Advocate

“I enjoyed Bryan’s translations of the plays tremendously, especially Antigone, which exemplifies what we need to do today. Like Antigone, we need to step out of our comfort zones and stand up for what is right, no matter what happens—even if it costs us our lives—so others can live.” —Gwen Carr, author of This Stops Today: Eric Garner’s Mother Seeks Justice After Losing her Son

“Bryan Doerries’s new translation of Sophocles’ indispensable Theban plays works as thrillingly on the page as it does in the world. The opening essay introduces readers to Doerries’s groundbreaking work at the intersection of classics, psychology, and activism. Doerries has shown that Greek theater is a technology for healing and for political change: one as potent in the hospitals, homeless shelters, military bases, and prisons of present-day America, as it was in Greek amphitheaters twenty-five hundred years ago. If you’re looking for proof that literature can change lives, this is it.” —Elif Batuman

“Bryan Doerries is a singular genius, activating an old alchemy for our young century just when we need it the most. He has brought the Oedipus Trilogy wondrously to life, in experiences both traditional and digital, towards our essential communal grieving, and healing, and growing. This book, like his body of work, is a gift to us all.” —Krista Tippett