We Should Have Seen It Coming: From Reagan to Trump--A Front-Row Seat to a Political Revolution (Paperback) 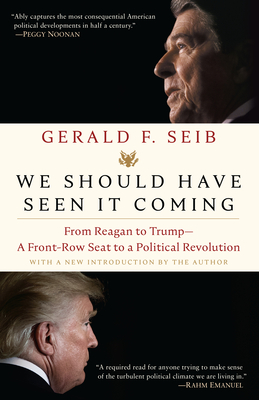 The executive Washington editor of The Wall Street Journal chronicles the astonishing rise, climax, and decline of one of the great political movements in American history—the forty-year reign of the conservative movement, from the election of Ronald Reagan to the Republican Party's takeover by Donald Trump—with a new introduction covering the 2020 election and the future of the GOP

“Ably captures the most consequential American political developments in half a century.” —Peggy Noonan

In 1980, President-Elect Ronald Reagan ushered in conservatism as the most powerful political force in America. For four decades, New Deal liberalism had been the country’s dominant motif, creating such popular programs as Social Security and Medicare, but it had become creaky in the face of soaring inflation, high unemployment, and a growing sense that the United States was no longer the dominant force on the world stage. Reagan's efforts to reshape the government with tax cuts, deregulation, increased military spending, and a more conservative social policy faltered at first. But the economy roared back, and the Reagan revolution was on.

In We Should Have Seen It Coming, veteran journalist Gerald F. Seib shows how this conservative movement came to dominate national politics, then began to evolve into the populist movement that Donald Trump rode to power. Conservative institutions including the Heritage Foundation, the National Rifle Association, Americans for Tax Reform, Rush Limbaugh and Fox News gave the conservative movement a support system, paving the way for Newt Gingrich's Contract with America and George W. Bush's compassionate conservatism. But we also see multiple warning signs, many overlooked or misread, that a populist revolution was brewing. Pat Buchanan, Ross Perot, Sarah Palin, and the Tea Party—all were precursors of the Trump takeover.

With behind-the-scenes anecdotes, Seib explains how Trump capitalized on that populist movement to victory in 2016, then began breaking from conservative orthodoxy once in office. He shows how Trump altered Republican relations with the business world, shattered conservative precepts on trade and immigration and challenged America’s long-standing alliances. This scintillating work of journalism brings new insight to the most important political story of our time.

Gerald F. Seib is the executive Washington editor of The Wall Street Journal, where he writes the weekly "Capital Journal" column. Previously the Washington bureau chief of the Journal, he reported on the Middle East for the Journal in the early 1980s, and covered the White House from 1987 through 1992. He has moderated three presidential debates, and interviewed every president since Ronald Reagan. He won the Merriman Smith Award for coverage of the presidency, the Aldo Beckman Award for coverage of the White House, and the Gerald R. Ford Foundation Prize. He was part of a team of reporters who won the Pulitzer Prize in the breaking news category for their coverage of 9/11. In 2005, he won the William Allen White Foundation national citation, and in 2009 the National Press Club's award for political analysis. He appears as an analyst on CNBC, Fox News, PBS's Washington Week, CBS's Face the Nation and NBC's Meet the Press. With CNN's John Harwood, he wrote Pennsylvania Avenue: Profiles in Backroom Power.

“The great Jerry Seib, as fair and trusted a political reporter and observer as there is, has written a serious, textured, and broad-gauged history of the Republican Party of the past fifty years, its highs and lows, triumphs and catastrophes. In doing so he ably captures the most consequential American political developments in half a century.”—Peggy Noonan, Wall Street Journal columnist

“Jerry Seib is among the finest political reporters of his generation. Seib does a masterful job documenting the history of the Republican Party from the election of Ronald Reagan in 1980 to the takeover of the GOP by Donald Trump. He covers that period and its key protagonists in a way that is engaging, thoughtful, comprehensive, balanced, and fair-minded. This textured book is essential to understanding American politics and the events that led to the rise of Donald Trump within the Republican Party.”—Peter Wehner, contributing opinion writer for The New York Times and vice president and senior fellow at the Ethics and Public Policy Center

“A required read for anyone trying to make sense of the turbulent political climate we are living in. We Should Have Seen It Coming is a thoughtful analysis of the recent historical trends that led us to today. This book is as insightful as it is entertaining and is written from the valuable and unique perspective that only a seasoned journalist of Jerry’s caliber could provide.”—Rahm Emanuel, author of The Nation City

“From his catbird seat at The Wall Street Journal’s Washington bureau, Jerry Seib has observed the conservative movement—and with it the Republican Party—for the decades from Reagan to Trump. This is a deeply informed, fast-paced, and often provocative look at the challenges of defining a new twenty-first-century conservatism.”—Karl Rove, author of Courage and Consequence

“Readable, reliable, and always thoughtful, Jerry Seib gives us a front-row explanation of how we went from the Gipper to the Donald in less than forty years, and what it means for the rest of America’s third century.”—Scott Reed, senior political strategist, U.S. Chamber of Commerce, and former executive director, Republican National Committee

“Followers of contemporary political history will appreciate how Seib gathers together the many strands of people and events culminating in present realities.”—Booklist (starred review)

“Judicious and approachable . . . Avoiding wonkishness while making such policy elements as supply-side economics and the Reagan-era tax cuts comprehensible, Seib draws on his insider perspective to deliver an incisive assessment of ‘the most important political story of the millennium.’ Political junkies will savor this evenhanded, anecdote-rich account.”—Publishers Weekly

“Generously conceived, thoroughly researched, and guaranteed to please no one at the political extremes.”—Kirkus Reviews