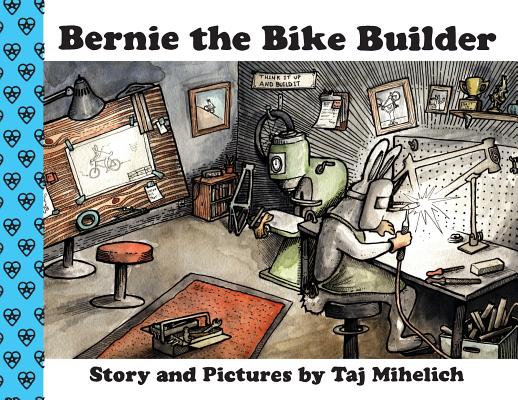 Bernie is a master bike builder. The bikes he designs and builds are sought after by bike racers all over the world. However, none of his close friends seem interested in riding bikes. After a discussion with Monty the Corgi he realizes that his friends think they can't ride bicycles because no bikes fit them. Bernie takes on the challenge to build his motely crew of pals custom bikes that they can ride. It takes all of his creativity and skills to design and build special bikes for T-rex, Bat, Shark and more

"In tight circles around a broad range of cycling subcultures old and new, BMX innovator, artist, animal lover and entrepreneur Taj Mihelich is a legend. A shy, clever, self-deprecating legend.

As a rider, Taj's influence on ramp, street and trail riding still resonates three decades after he burst onto the BMX scene.

As an entrepreneur, Taj's thoughtful, slightly irreverent perspective on the fun and freedom of riding a bicycle has inspired an army of smiling cyclers to follow his tire tracks worldwide.

"Bernie the Bike Builder" is the brightest peek yet into the colorful world of Taj Mihelich's busy mind. Whimsically written and vividly illustrated by the life-long lover of all things two-wheeled, Taj's first book follows an industrious rabbit and his Corgi pal Monty as the unlikely pair craft custom bicycles for a curious band of animal friends.

A sublime allegory about creatures and dreams big and small, "Bernie the Bike Builder" packs Seussian levels of heart and light into a story for all ages. Where the animals in Taj's head dream of going might surprise you. How they get there will blow your mind."