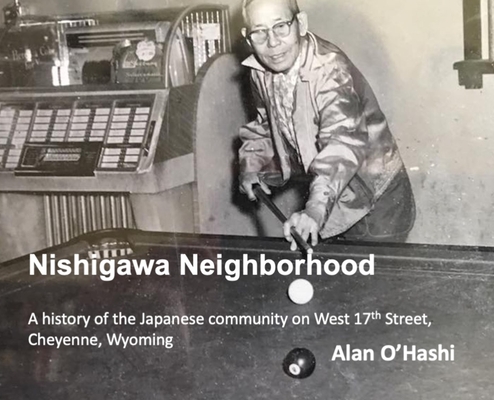 Nishigawa Neighborhood is a picture book based on a memoir entitled Beyond Heart Mountain by Alan O'Hashi. The photographs are from my personal collections and interspersed with excerpts from the memoir, Beyond Heart Mountain. Check out the first 12 pages and some of the 100 pictures in the coffee table book at:

The picture book emphasizes the history of the once vibrant Japanese community in the 400 and 500 blocks of West 17th Street in the downtown area of his hometown, Cheyenne, Wyoming. Alan's grandmother and grandfather Ohashi lived in worked in that neighborhood. The young O'Hashi spent quite a bit of time there between elementary and high school.

Having been away from Cheyenne for many years, he stashed those two blocks in the back of his mind until he learned that two classmates were planning to build a housing development at 509 W. 17th St. The biggest obstacle was obtaining permission to tear down an old building. It was the last structure in the Japanese neighborhood. It was the site of a rooming house operated by Mrs. Yoshio Shuto.

Her tenants were mainly Japanese residents who made their way to Cheyenne. She later opened the City Cafe across the street that became a gathering place for the Japanese in town.

My friends enlisted to do a cultural and historical survey of the Japanese denizens who lived and worked there from generally the 1920s through the 1970s, which is the basis of the coffee table book.

There is a documentary also based on the memoir that aired on PBS and is available on DVD through: