The Age of Scorpio (Paperback) 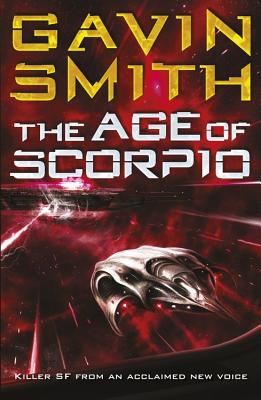 Of all the captains based out of Arclight only Eldon Sloper was desperate enough to agree to a salvage job in Red Space. And now he and his crew are living to regret his desperation.

In Red Space the rules are different. Some things work, others don't. Best to stick close to the Church beacons. Don't get lost.

Because there's something wrong about Red Space. Something beyond rational. Something vampyric...

Long after The Loss, mankind is different. We touch the world via neunonics. We are machines, we are animals, we are hybrids. But some things never change. A Killer is paid to kill, a Thief will steal countless lives. A Clone will find insanity, an Innocent a new horror. The Church knows we have kept our sins.

Gavin G. Smithis the Dundee-born author of the hard edged, action-packed SF novels Veteran, War in Heaven, Age of Scorpio, A Quantum Mythology and The Beauty of Destruction, as well as the short story collection Crysis: Escalation. He has collaborated with Stephen Deas as the composite personality Gavin Deas and co-written Elite: Wanted, and the shared world series Empires: Infiltration and Empires: Extraction.

Age Of Scorpio announces loud and clear that in Gavin Smith an exceptional talent has arrived to uplift SF. The book is a master class of twisting plot lines that celebrate both the weird and astounding, amid a future that's deeply unnerving yet equally compelling.—Peter F Hamilton

Gavin Smith's writing is a brutal kaleidoscope of imagination, with the raw energy of a heavy metal album cover: equally dazzling with bloodthirsty ancient Picts and the fallen post-humans of tomorrow.—Hannu Rajaniemi, author of The Causal Angel