And It Don't Stop: The Best American Hip-Hop Journalism of the Last 25 Years (Paperback) 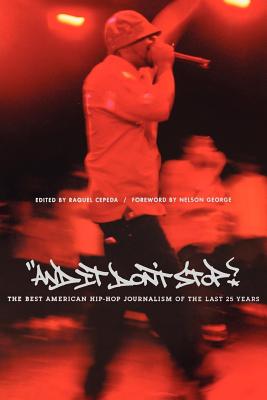 In September 1979, there was a cosmic shift that went unnoticed by the majority of mainstream America. This shift was triggered by the release of the Sugarhill Gang's single, Rapper's Delight. Not only did it usher rap music into the mainstream's consciousness, it brought us the word "hip-hop." And It Don't Stop, edited by the award winning journalist Raquel Cepeda, with a foreword from Nelson George is a collection of the best articles the hip-hop generation has produced. It captures the indelible moments in hip-hop's history since 1979 and will be the centerpiece of the twenty-fifth-anniversary celebration.

This book epitomizes the media's response by taking the reader on an engaging and critical journey, including the very first pieces written about hip-hop for publications like The Village Voice--controversial articles that created rifts between church and state, the artist and journalist, and articles that recorded the rise and tragic fall of the art form's appointed heroes, such as Tupac Shakur, Eazy-E, and the Notorious B.I.G. The list of contributors includes Toure, Kevin Powell, dream hampton, Harry Allen, Cheo Hodari Coker, Greg Tate, Bill Adler, Hilton Als, Danyel Smith, and Joan Morgan.

Raquel Cepeda, former Editor-in-Chief of OneWorld Magazine, is an award-winning journalist. She has contributed to MTV News, The Village Voice, Source, Vibe, Essence, Jalouse, and many other publications. She lives in New York City.

“Hip Hop is the voice of the communtity and its child, Hip Hop journalism, adds a new element to the mix in another medium that goes way beyond the music industry to become a true organ of news. And It Don't Stop is essential reading. It captures the extraordinary eruptions of word, image and sound that Hip Hop inspired and, in itself, continues the process of self-definition and community empowerment that has characterized the movement from the earliest days to the present. Raquel Cepeda knew how to pick them. The articles she has chosen are a distillation of the significant events, personalities, conflicts and philosophies that together shape the revolutionary impact of Hip Hop on the world.” —Henry Chalfant, co-author of Spray Can Art

“An irresistible compilation of the most stylish prose and revelatory interviews of the last twenty-five years on Hip Hop, And It Don't Stop is required reading for any serious devotee of contemporary urban culture. Raquel Cepeda places Hip Hop journalism in a historical framework: we not only discover how writing styles have changed over the years, but we also learn how the stakes in writing about Hip Hop have transformed alongside the music and culture. It's a glorious reminder of how influential journalists have been, and continue to be, in helping to shape and create this thing we call Hip Hop.” —Jason King, Associate Chair, The Clive Davis Department of Recorded Music, New York University

“And It Don't Stop is long overdue. Boom! Like powerful shots from the cannon. Rock shocking, in the place to be! The writers in this collection, like Kierna Mayo, dream hampton, Raquel Cepeda, Bill Adler, and Sacha Jenkins are some of the most brilliant writers--hip hop or not--of the last twenty-five years. I welcome this book.” —Bobbito Garcia, DJ, basketball performer, author of Where D'You Get Those? New York City's Sneaker Culture: 1960-1987

“Raquel Cepeda has finally done justice to the mother-wit, social power, and visceral passion of hip-hop journalism. Here's an indispensable collection of pioneering, bold, visionary and cautionary writing, a must-have for anyone who loves this culture.” —Jeff Chang, author Can't Stop Won't Stop: A History of the Hip-Hop Generation

“At their best, popular culture journalists give us an insightful, ground-level, up-close view. That's what we've got here. This is some of the best journalism on hip hop over the past 25 years--a valuable collection for hip hop students, fans and nostalgic observers alike.” —Tricia Rose, author of Black Noise: Rap Music and Black Culture in Contemporary America

“Once in a while a book comes along that commands attention. And It Don't Stop is hip hop defined by its generations' best writers and observers, an absolute must have--definite satisfaction” —Ahmir "?uestlove" Thompson, The Roots

“And It Don't Stop features snapshots of some of hip hop's finest moments by the generation's greatest thinkers. Raquel Cepeda did an excellent job at framing it like it was and is. This is a must-have for those who have defined as well as those who are curious about the culture.” —Russell Simmons, producer, activist, founder of Def Jam Records

“Whatever one's feelings about 'hip hop nation,' it certainly has given rise to vibrant journalism. Thanks to Raquel Cepeda for collecting it in this important new book.” —Henry Louis Gates, Jr