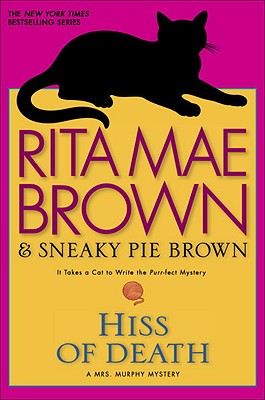 Beloved authors Rita Mae Brown and her feline co-conspirator, Sneaky Pie Brown, sow the seeds of an all-new mystery featuring Mary Minor “Harry” Haristeen, sleuthing cats Mrs. Murphy and Pewter, and that incorrigible corgi Tee Tucker. This time around, the onset of spring ushers in more than hay fever as the animal friends must come to the aid of an ailing Harry to sniff out the season’s first blossom of murder.

Ah, spring! The redbuds open, the robins return, and the days lengthen. People’s spirits lift—as do those of their animal companions. As a wave of tilling and planting sweeps over Crozet, Virginia, Harry is especially excited: This year is her first harvesting grapes to sell. But then a health crisis sends her reeling into the forbidding world of hospitals and doctors, treatments and procedures.

Surviving this journey will be tough, but Mrs. Murphy, Pewter, and Tucker will do their best to steer Harry in the right direction—as will her ever-helpful husband, Fair. Others will have worse luck: An especially promising nurse’s lifeless body is discovered without a mark on her. Then another hospital employee, who had seemed in perfect health, is also found dead. It’s clear there’s a mystery afoot—and that’s one thing Harry and her menagerie can’t keep their noses out of.

Rita Mae Brown is the bestselling author of several novels, including the Sneaky Pie Brown series, the Sister Jane series, "A Nose for Justice, Rubyfruit Jungle, In Her Day, " and "Six of One." An Emmy-nominated screenwriter and a poet, Brown lives in Afton, Virginia.

Sneaky Pie Brown, a tiger cat born somewhere in Albemarle County, Virginia, was discovered by Rita Mae Brown at her local SPCA. They have collaborated on eighteen previous Mrs. Murphy mysteries: "Wish You Were Here; Rest in Pieces; Murder at Monticello; Pay Dirt; Murder, She Meowed; Murder on the Prowl; Cat on the Scent; Pawing Through the Past; Claws and Effect; Catch as Cat Can; The Tail of the Tip-Off; Whisker of Evil; Cat's Eyewitness; Sour Puss; Puss 'n Cahoots; The Purrfect Murder; Santa Clawed;" and "Cat of the Century, " in addition to "Sneaky Pie's Cookbook for Mystery Lovers."

"Brown ratchets up the tension in a conclusion that brings Harry, the killer, both cats, the dog and two horses into the final showdown. Brown...reunites the reader with beloved characters, supplies a wealth of local color and creates a killer whose identity and crimes are shocking (in one case, particularly so)."--Richmond Times-Dispatch

"As explained on the book’s cover, it takes a cat to write the purr-fect mystery. Indeed...With a baffling mystery at hand (or paw), it might just prove to be one of [Harry's] most perplexing cases."--Tucson Citizen

"Brown sensitively depicts Harry's cancer treatment as the paw-biting action...builds to the revelation of a surprising killer."--Publishers Weekly

"If you love animals...and have ever wondered what your pets are saying, these books are delightful."--Briar Patch Books