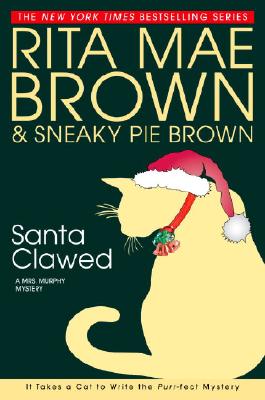 New York Times bestselling authors Rita Mae Brown and her feline partner, Sneaky Pie Brown, are back for the holidays in a new mystery featuring Mary Minor “Harry” Haristeen, the sleuthing cats Mrs. Murphy and Pewter, and corgi Tee Tucker. Can they save the season from a killjoy who’s decided to gift the festive little town…with murder?


As Harry well knows, there’s hardly a place on earth cozier than Crozet, Virginia, at Christmastime. The snowflakes drifting lazily down, the soft glow of the winter light, the sound of old carols in the streets…even cats Mrs. Murphy and Pewter get into the spirit batting ornaments and climbing the holiday tree. In fact, it’s this year’s tree that Harry and her husband, Fair, have gone to fetch when they find the one they’ve chosen grimly decorated with a dead body.

The tree farm is run by The Brothers of Love, a semimonastic organization that tends to AIDS patients. The brothers live in a monastery atop the scenic Blue Ridge Mountains. Harry is surprised to find an old high-school friend associated with The Brothers of Love. Christopher Hewitt wasn’t a bad man, but good works weren’t exactly one of his priorities. But then, if even Scrooge could turn over a new leaf, certainly Chris could. And after the scandal that all but destroyed his life, there were probably few in Crozet who needed the gift of a second chance more.

Harry knows she shouldn’t take it personally, but it was her tree that someone left the corpse under. Now, as the season grows merrier, a murderer is growing bolder. One by one, prominent men of Crozet are being crossed off Christmas shopping lists and added to the morgue. And if Harry and her four-legged helpers aren’t very good—and very careful—this Christmas may be her last.