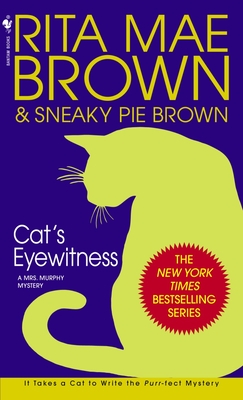 This is book number 13 in the Mrs. Murphy series.

It’s no secret that cats are a mystery writer’s best friend. Just ask the bestselling team of Rita Mae Brown and her furry partner, Sneaky Pie Brown, back on the prowl with another unforgettable whodunit. This time a controversial miracle in Virginia’s Blue Ridge Mountains sparks religious fervor–and a suspicious death. Now the indefatigable felines Mrs. Murphy and Pewter, along with the dogged corgi Tee Tucker, must trust their animal instincts to sniff out the worst of human nature....

With the holidays approaching, Mary Minor “Harry” Haristeen and her best friend, Susan Tucker, take a much-needed time-out at the mountain monastery of Mount Carmel. There, under the benevolent gaze of the statue of the Virgin Mary, their worldly worries are soon overshadowed. For in front of their very eyes the statue begins to cry tears of blood.

Legend has it that Mary’s crimson tears are harbingers of crises. And though skeptical, the ever-practical Harry can already see one on the horizon. If leaked, news of the so-called miracle could turn the monastery and the town of Crozet into a circus. What Harry doesn’t foresee is murder.…

When Susan’s great-uncle Thomas, a resident monk, is found frozen to death at the base of the statue, foul play is ruled out–at first. But at Harry’s urging, the body is exhumed for an autopsy. There’s just one problem: the coffin is empty. That’s when Mrs. Murphy, Pewter, and Tucker get involved. Then there’s the shocking revelation of a mystery that has perplexed the citizens of Crozet for ages.

With Christmas around the corner and the monastery overrun by the faithful, all Harry’s meddling menagerie can do is stay on her trail as she jumps knee-deep into an unofficial investigation–one that becomes more dangerous when another Crozet citizen meets an untimely demise. In this case it will be a miracle if Harry stays alive....