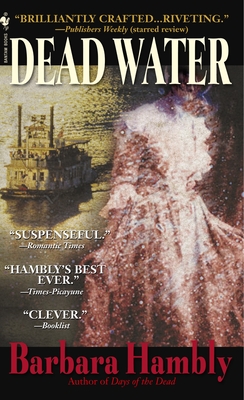 By Barbara Hambly
$7.99
Unavailable, Out of Stock, or Out of Print

This is book number 8 in the Benjamin January series.

Nineteenth-century New Orleans is a blazing hotbed of scorching politics and personal vendettas. And it's into this fire that Benjamin January falls when he is hired to follow Oliver Weems, a bank official who has absconded with $100,000 in gold and securities. But it's more than just a job for January. The missing money is vital to the survival of the school for freed slaves that he and his wife Rose have founded.

Following the suspected embezzler—and the money—onto the steamboat Silver Moon, January, Rose, and their friend Hannibal Sefton are sworn to secrecy about the crime until they can find the trunks containing the stolen loot. And then the unexpected happens: Weems is found murdered and suddenly the job of finding the pirated stash grows not only more difficult—but more deadly. There is no shortage of suspects—from the sinister slave-dealer to the bullying steamship pilot to the suspiciously innocent "lady" with connections to every river pirate in the riotous port of Natchez-Under-the-Hil—who all seem to have something to hide.

Now, with time running out, January seeks clues wherever he can find them--and allies among whoever can help. Working in tandem with a young planter named Jefferson Davies, he must uncover the dark web of corruption, betrayal, and greed that has already cost one man his life...and, if he can't catch a brutal, remorseless killer, will soon cost January and his friends theirs.

Barbara Hambly is the author of The Emancipator’s Wife, a finalist for the Michael Shaara Award for Excellence in Civil War Fiction. She is also the author of Fever Season, a New York Times Notable Book of the Year, and seven acclaimed historical novels.

"Brilliantly crafted ... brings the antebellum South so alive you could swear the author traveled back in time to observe her setting firsthand.... A riveting novel of suspense."—Publishers Weekly, starred review