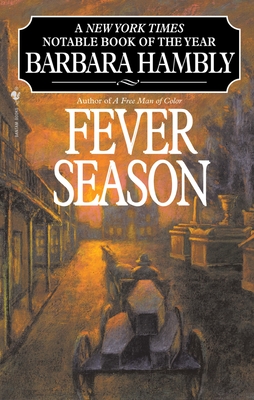 This is book number 2 in the Benjamin January series.

Benjamin January made his debut in bestselling author Barbara Hambly's A Free Man of Color, a haunting mélange of history and mystery. Now he returns in another novel of greed, madness, and murder amid the dark shadows and dazzling society of old New Orleans, named a Notable Book of the Year by the New York Times.

The summer of 1833 has been one of brazen heat and brutal pestilence, as the city is stalked by Bronze John—the popular name for the deadly yellow fever epidemic that tests the healing skills of doctor and voodoo alike. Even as Benjamin January tends the dying at Charity Hospital during the steaming nights, he continues his work as a music teacher during the day.

When he is asked to pass a message from a runaway slave to the servant of one of his students, January finds himself swept into a tempest of lies, greed, and murder that rivals the storms battering New Orleans. And to find the truth he must risk his freedom...and his very life.

Barbara Hambly is the author of The Emancipator’s Wife, a finalist for the Michael Shaara Award for Excellence in Civil War Fiction. She is also the author of Fever Season, a New York Times Notable Book of the Year, and seven acclaimed historical novels.

"Stunning. From the highborn Creoles to the uncivilized Americans, Hambly knows all their secrets and brings them all to life."—The New York Times Book Review