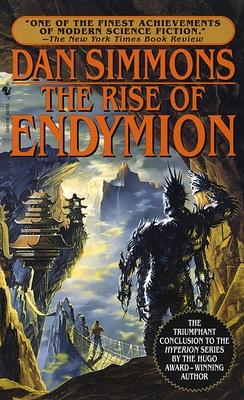 This is book number 4 in the Hyperion Cantos series.

The time of reckoning has arrived. As a final genocidal Crusade threatens to enslave humanity forever, a new messiah has come of age. She is Aenea and she has undergone a strange apprenticeship to those known as the Others. Now her protector, Raul Endymion, one-time shepherd and convicted murderer, must help her deliver her startling message to her growing army of disciples.

But first they must embark on a final spectacular mission to discover the underlying meaning of the universe itself. They have been followed on their journey by the mysterious Shrike--monster, angel, killing machine--who is about to reveal the long-held secret of its origin and purpose. And on the planet of Hyperion, where the story first began, the final revelation will be delivered--an apocalyptic message that unlocks the secrets of existence and the fate of humankind in the galaxy.

"One of the finest achievements of modern science fiction."
--The New York Times Book Review

"The Rise Of Endymion, like its predecessors, is a full-blooded action novel...distinguished from formulaic space opera by the magnitude of what is at stake--which is nothing less than the salvation of the human soul."
--The New York Times Book Review

"A novel rich with power and passion, and an enormously satisfying conclusion to one of the major works of modern science fiction."
--Locus