Fool's Quest: Book II of the Fitz and the Fool Trilogy (Hardcover) 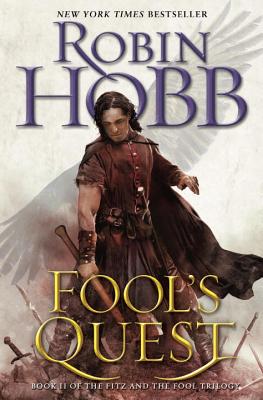 NEW YORK TIMES BESTSELLER - NAMED ONE OF THE BEST BOOKS OF THE YEAR BY BUZZFEED AND THE INDEPENDENT - Ranking alongside George R. R. Martin as a groundbreaking master of fantasy, Robin Hobb delivers the second book in her long-awaited Fitz and the Fool trilogy.

The harrowing adventures of FitzChivalry Farseer and his enigmatic friend the Fool continue in Robin Hobb's triumphant follow-up to Fool's Assassin. But Fool's Quest is more than just a sequel. With the artistry and imagination her fans have come to expect, Hobb builds masterfully on all that has gone before, revealing devastating secrets and shocking conspiracies that cast a dark shadow over the history of Fitz and his world--a shadow that now stretches to darken all future hope.

Long ago, Fitz and the Fool changed the world, bringing back the magic of dragons and securing both the Farseer succession and the stability of the kingdom. Or so they thought. But now the Fool is near death, maimed by mysterious pale-skinned figures whose plans for world domination hinge upon the powers the Fool may share with Fitz's own daughter.

Distracted by the Fool's perilous health, and swept up against his will in the intrigues of the royal court, Fitz lets down his guard . . . and in a horrible instant, his world is undone and his beloved daughter stolen away by those who would use her as they had once sought to use the Fool--as a weapon.

But FitzChivalry Farseer is not without weapons of his own. An ancient magic still lives in his veins. And though he may have let his skills as royal assassin diminish over the years, such things, once learned, are not so easily forgotten.

Now enemies and friends alike are about to learn that nothing is more dangerous than a man who has nothing left to lose.

"If readers have any doubt that Robin Hobb is one of the finest writers in the fantasy genre, then they haven't read any of her work."--SFFWorld "Hobb finds a way to always show us more details of the universe she's been building over the course of the four previous series. . . . The friendship of Fitz and the Fool brings danger to them both, but it's one of the most touching in fantasy fiction."--Library Journal (starred review)

"Fantasy as it ought to be written."--George R. R. Martin

"Hobb knows the complicated workings of the wayward human heart, and she takes time to depict them in her tale, to tell her story sweetly, insistently, compellingly. . . . A book meant to be inhabited rather than run through."--The Seattle Times

" FitzChivalry Farseer is] one of the best characters in fantasy literature."--Fantasy Book Review

" Hobb's] prose sparkles, her characters leap off the page."--Tor.com

Robin Hobb is the author of the Farseer Trilogy, the Liveship Traders Trilogy, the Tawny Man Trilogy, the Soldier Son Trilogy, and the Rain Wilds Chronicles. She has also written as Megan Lindholm. She is a native of Washington State.