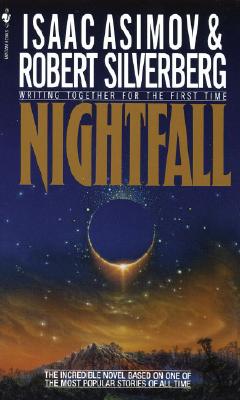 By Isaac Asimov, Robert Silverberg
This Book Is Not Sold Online - Inquire In Store
Hard to Find

On a planet with six suns, night is about to fall for the first time in two thousand years . . .

The planet Kalgash is on the brink of chaos—but only a handful of people realize it. Kalgash knows only the perpetual light of day; for more than two millennia, some combination of its six suns has lit up the sky. But twilight is now gathering. Soon the suns will set all at one—and the terrifying splendor of Nightfall will call forth a madness that signals the end of civilization

Isaac Asimov's short story “Nightfall” first appeared in 1941. It has since become recognized as a classic, its author a legend. But the short story isn't the whole story. Now, Dr. Asimov has teamed with multiple Hugo and Nebula Award winner Robert Silverberg to explore and expand one of the most awe-inspiring concepts in the history of science fiction.

In this novel, you will witness Nightfall—and much more.

You will learn what happens at Daybreak.

Isaac Asimov began his Foundation series at the age of twenty-one, not realizing that it would one day be considered a cornerstone of science fiction. During his legendary career, Asimov penned more than 470 books on subjects ranging from science to Shakespeare to history, though he was most loved for his award-winning science fiction sagas, which include the Robot, Empire, and Foundation series. Named a Grand Master of Science Fiction by the Science Fiction Writers of America, Asimov entertained and educated readers of all ages for close to five decades. He died, at the age of seventy-two, in April 1992.