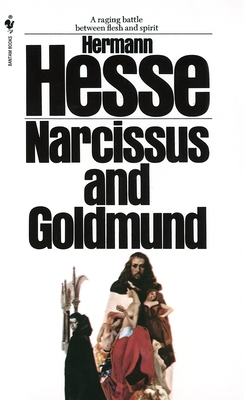 By Hermann Hesse
$7.99
On Our Shelves Now - Please allow up to 48-hours for Curbside Pickup orders to be processed.

Hesse's novel of two medieval men, one quietly content with his religion and monastic life, the other in fervent search of more worldly salvation. This conflict between flesh and spirit, between emotional and contemplative man, was a life study for Hesse. It is a theme that transcends all time.

The Hesse Phenomenon “has turned into a vogue, the vogue into a torrent . . . He has appealed both  to . . . an underground and to an establishment . .  . and to the disenchanted young sharing his contempt for our industrial civilization.”—The New York Times Book Review

Hermann Hesse was born in 1877 in Calw, Germany. He was the son and grandson of Protestant missionaries and was educated in religious schools until the age of thirteen, when he dropped out of school. At age eighteen he moved to Basel, Switzerland, to work as a bookseller and lived in Switzerland for most of his life. His early novels included Peter Camenzind (1904), Beneath the Wheel (1906), Gertrud (1910), and Rosshalde (1914). During this period Hesse married and had three sons. During World War I Hesse worked to supply German prisoners of war with reading materials and expressed his pacifist leanings in anti-war tracts and novels. Hesse's lifelong battles with depression drew him to study Freud during this period and, later, to undergo analysis with Jung. His first major literary success was the novel Demian (1919). When Hesse's first marriage ended, he moved to Montagnola, Switzerland, where he created his best-known works: Siddhartha (1922), Steppenwolf (1927), Narcissus and Goldmund (1930), Journey to the East (1932), and The Glass Bead Game (1943). Hesse won the Nobel Prize for Literature in 1946. He died in 1962 at the age of eighty-five.