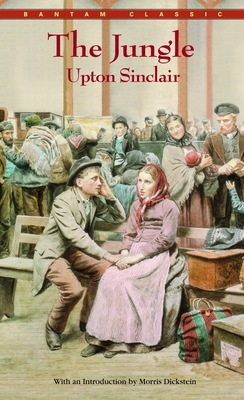 By Upton Sinclair, Morris Dickstein (Contributions by)
$5.95
On Our Shelves Now - Please allow up to 48-hours for Curbside Pickup orders to be processed.

In this powerful book we enter the world of  Jurgis Rudkus, a young Lithuanian immigrant who arrives  in America fired with dreams of wealth, freedom,  and opportunity. And we discover, with him, the  astonishing truth about "packingtown," the  busy, flourishing, filthy Chicago stockyards, where  new world visions perish in a jungle of human  suffering. Upton Sinclair, master of the  "muckraking" novel, here explores the workingman's  lot at the turn of the century: the backbreaking  labor, the injustices of "wage-slavery,"  the bewildering chaos of urban life. The  Jungle, a story so shocking that it  launched a government investigation, recreates this  startling chapter if our history in unflinching  detail. Always a vigorous champion on political reform,  Sinclair is also a gripping storyteller, and his  1906 novel stands as one of the most important --  and moving -- works in the literature of social  change.

Jane Jacobs is one of the most original economic and sociological thinkers of our day. Her books include the classic The Death and Life of Great American Cities and, most recently, The Nature of Economies, both of which are available in Modern Library clothbound editions. She lives in Toronto.

“When people ask me what has happened in my long lifetime I do not refer them to the newspaper files and to the authorities, but to [Sinclair’s] novels.” —George Bernard Shaw