The Nazis Next Door: How America Became a Safe Haven for Hitler's Men (Hardcover) 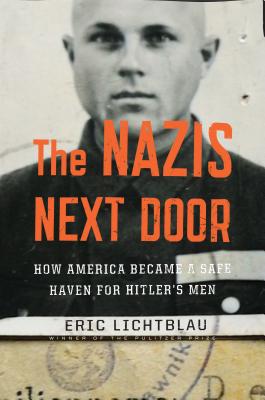 The shocking story of how America became one of the world’s safest postwar havens for Nazis
Thousands of Nazis — from concentration camp guards to high-level officers in the Third Reich — came to the United States after World War II and quietly settled into new lives. They had little trouble getting in. With scant scrutiny, many gained entry on their own as self-styled war "refugees," their pasts easily disguised and their war crimes soon forgotten. But some had help and protection from the U.S. government. The CIA, the FBI, and the military all put Hitler's minions to work as spies, intelligence assets, and leading scientists and engineers, whitewashing their histories.

For the first time, once-secret government records and interviews tell the full story not only of the Nazi scientists brought to America, but of the German spies and con men who followed them and lived for decades as ordinary citizens. Only years after their arrival did private sleuths and government prosecutors begin trying to identify the hidden Nazis. But even then, American intelligence agencies secretly worked to protect a number of their prized spies from exposure. Today, a few Nazis still remain on our soil.

Investigative reporter Eric Lichtblau, relying on a trove of newly discovered documents and scores of interviews with participants in this little-known chapter of postwar history, tells the shocking and shameful story of how America became a safe haven for Hitler's men.

ERIC LICHTBLAU, a two-time Pulitzer Prize–winning journalist, is the best-selling author of The Nazis Next Door and Bush’s Law: The Remaking of American Justice. He was a Washington reporter for the New York Times for fifteen years, while also writing for the Los Angeles Times, The New Yorker, TIME, and other publications. He has been a frequent guest on NPR, MSNBC, C-SPAN, and other networks, as well as a speaker at many universities and institutions. He lives outside Washington, D.C.

"Lichtblau brings ample investigative skills and an elegant writing style to this unsavory but important story. The Nazis Next Door is a captivating book rooted in first-rate research." —The New York Times Book Review

"A fast paced, important book about the Justice Department’s efforts to bring Nazi war criminals in the US to justice that also uses recently declassified facts to expose the secret, reprehensible collaboration of US intelligence agencies with those very Nazis." — Elizabeth Holtzman, United States House of Representatives (former)