The Wearle (The Erth Dragons #1) (Paperback) 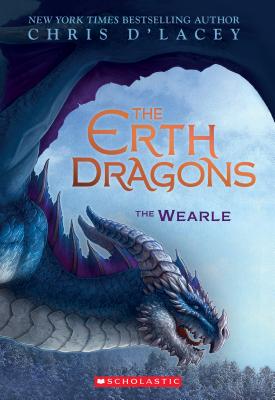 This is book number 1 in the The Erth Dragons series.

A Wearle of dragons set out on an expedition from their home planet and was never heard from again. Now, a new Wearle, determined to find the first, has come to the place its creatures call Erth. Gabrial, who still has the blue scales of a young dragon, is eager to prove himself, and to find his missing father. But when Gabrial causes an accident that results in a baby dragon going missing, he'll have to prove himself worthy of remaining with the Wearle at all.
Across the scorch line, most Hom, or humans, live in fear of the dragons. But a boy named Ren is too fascinated to stay away, and will soon find his fate intertwined with that of the dragons. When conflict erupts between the dragons and humankind, Ren does the unimaginable, crossing into dragon territory. Will he be able to gain the dragons' trust and prevent an all-out war?
NYT bestseller Chris d'Lacey sweeps readers off on an extraordinary adventure bursting with majestic creatures and one boy with the heart of a dragon.

Chris d’Lacey is the author of several highly acclaimed books, including the New York Times bestselling Last Dragon Chronicles series; the Dragons of Wayward Crescent series; the UNICORNE Files trilogy; and The Erth Dragons series, The Wearle and Dark Wyng. Chris lives in Devon, England, with his wife, Jay, where they are at work on his next book.

Praise for The Erth Dragons series:
"An inspirational new dragon series. . . . An exciting read for dragon lovers and fans of d'Lacey's 'The Last Dragon Chronicles' and Tui T. Sutherland's 'Wings of Fire' series." -- School Library Journal
"D'Lacey presents high fantasy with dragons as main characters . . . Rich in betrayal and adventure." -- Booklist
"The creative spin on the intersection of dragon history and prehistoric humans is interesting and the action engaging." -- Kirkus Reviews
"Full of action and description, this book's multi-layered story commands the reader's imagination and attention." -- School Library Connection
Praise for the UNICORNE Files series:
"Will hook readers from page one and won't let up until the dramatic conclusion. D'Lacey manages to make the implausible seem possible." -- School Library Journal
"A lively and enjoyable read." -- Bulletin of the Center for Children's Books
"A quest laden with suspense and action.... Will leave readers wanting more." -- Booklist
Praise for the Last Dragon Chronicles:
"Chris d'Lacey's writing is sometimes exciting and sometimes silly. But that seems in keeping with the worlds he created -- one that seems almost real and one that is beyond imagination." -- The Washington Post
"An entertaining adventure." -- Kirkus Reviews
"D'Lacey's characters are realistic and engaging.... A page-turner." -- The Horn Book