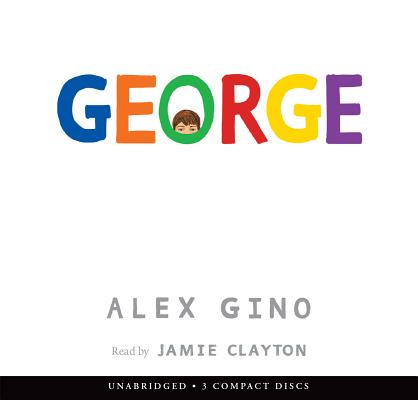 “George, or rather Melissa is a girl.  She’s known this ever since she was little.  Ut everyone says she’s a boy.  Determined to be who she is, Melissa and her best friend come up with a plan to show everyone the truth.  I loved Alex Gino’s GEORGE and how the story is about how one girl and her community face problems together despite roadblacks.  An incredibly lovely and important debut”

— Ren at Compass Books at SFO

A bright, bold debut about a girl who happens to have been born a boy, but refuses to let that stand in the way of her dream.

More than anything else, George wants to play Charlotte in her fourth-grade class"s production of Charlotte's Web. The problem is, her teacher won"t let her, because George is a boy. But George isn't about to let that squash her dream. With the help of her best friend, George must learn to stand up for her wish -- and brave a few bullies along the way.

Transcending all categories and genres, George is a pertinent and poignant middle-grade read for kids of all backgrounds.

;
* "A coda to the Charlotte's Web story, in which George presents herself as a girl for the first time, is deeply moving in its simplicity and joy. Warm, funny, and inspiring." -- Kirkus Reviews, starred review

* "Profound, moving, and-as Charlotte would say-radiant, this book will stay with anyone lucky enough to find it." -- Publishers Weekly, starred review
;
Alex Gino loves glitter, ice cream, gardening, awe-ful puns, and stories that reflect the diversity and complexity of being alive. George is their first novel. For more about Alex, please visit alexgino.com.

"Gino does an excellent job introducing factual information into the narrative without impinging upon the accessible and appealing story.. Pair this important addition to the slender but growing body of transgender fiction with Ami Polonsky's Gracefully Grayson (2014)."- Booklist, starred review

"George is a timely book for parents to share and discuss with their children, whether dealing with similar issues or simply to foster understanding." - Entertainment Weekly

"[I]nsightful...it'll resonate with anyone who has ever felt different." - People Magazine "People Picks: The Best New Books"