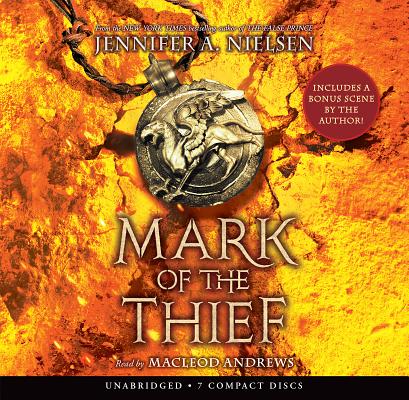 By Jennifer A. Nielsen
This Book Is Not Sold Online - Inquire In Store
Not In Stock/Special Order

Jennifer A. Nielsen, author of the NYT and USA TODAY bestselling Ascendance Trilogy, has woven an electrifying tale of greed and power, magic and destiny, and one boy's courage at the heart of it all.
When Nic, a slave in the mines outside of Rome, is forced to enter a sealed cavern containing the lost treasures of Julius Caesar, he finds much more than gold and gemstones: He discovers an ancient bulla, an amulet that belonged to the great Caesar and is filled with a magic once reserved for the Gods -- magic some Romans would kill for.

Jennifer A. Nielsen is the acclaimed author of the New York Times and USA Today bestselling Ascendance Series: The False Prince, The Runaway King, The Shadow Throne, and The Captive Kingdom. She also wrote the New York Times bestselling Mark of the Thief trilogy: Mark of the Thief, Rise of the Wolf, and Wrath of the Storm; the stand-alone fantasy The Scourge; the historical thrillers A Night Divided, Resistance, and Words on Fire; the second book in the Horizon series, Deadzone; Book Six of the Infinity Ring series, Behind Enemy Lines; and The Traitor's Game series: The Traitor's Game, The Deceiver's Heart, and The Warrior's Curse. Jennifer lives in northern Utah with her husband, their children, and a perpetually muddy dog.

Praise for the Ascendance Trilogy:

A Publishers Weekly Best Book of the Year

A Chicago Public Library "Best of the Best" Children's Book

"Sage proves to be a compelling character whose sharp mind and shrewd self-possession will make readers eager to follow him into a sequel." -The Wall Street Journal

"A fast-paced and thrilling read with twists and turns that never let up." -School Library Journal

"A sure-fire mix of adventure, mystery, and suspense." -The Horn Book