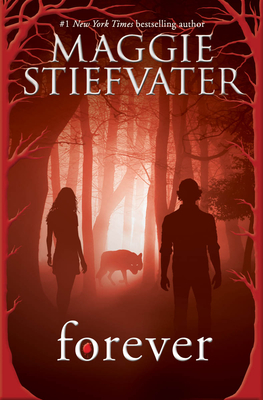 This is book number 3 in the Shiver series.

The thrilling conclusion to #1 bestselling Shiver trilogy from Maggie Stievater.

When Sam met Grace, he was a wolf and she was a girl. Eventually he found a way to become a boy, and their love transformed from curious distance to the intense closeness of shared lives.

That should have been the end of their story. But Grace was not meant to stay human. Now she is the wolf. And the wolves of Mercy Falls are about to be hunted in one final, spectacular kill.

Sam would do anything for Grace. But can one boy and one love really change a hostile, predatory world? The past, the present, and the future will all collide in one pure moment - a moment of death or life, farewell or forever.
;
Praise for Maggie Stiefvater:

"If Shiver left fans wanting more, Linger will have them begging." -Romantic Times

* "Beautiful and moving...The mythology surrounding the wolf pack is clever and so well written that it seems perfectly normal for the creatures to exist in today's world. A must-have that will give Bella and Edward a run for their money." - SLJ, starred review

* "Stiefvater leaves the faeries of Lament and Ballad for a lyrical tale of alienated werewolves and first love....her take on werewolves is interesting and original while her characters are refreshingly willing to use their brains to deal with the challenges they face." - PW, starred review

"All readers will be able to enjoy Stiefvater's fast-paced storytelling and dedication to the old-fashioned art of creating a believable and enduring romance. Shiver is beautifully written, even poetic at times, and a perfect indulgence for readers of all ages." - BookPage
;
Maggie Stiefvater is the #1 NEW YORK TIMES bestselling author of the novels SHIVER, LINGER, and FOREVER. Her novel THE SCORPIO RACES was named a Michael L. Printz Honor Book by the American Library Association, while PUBLISHERS WEEKLY selected Maggie's THE RAVEN BOYS as a Best Book of the Year. She is also the author of LAMENT and BALLAD. Maggie lives in Virginia with her husband and their two children. You can visit her online at www.maggiestiefvater.com.

Praise for the Shiver Trilogy:

"Beautifully written, even poetic at times, and a perfect indulgence for readers of all ages." -BookPage