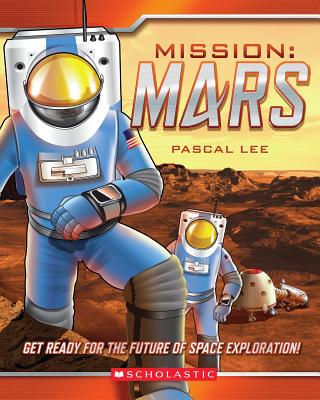 By Pascal Lee
$6.99
Unavailable, Out of Stock, or Out of Print

Learn about what it takes to send humans to Mars--from spacesuits and rovers to surviving subzero temperatures and raging dust storms.

The United States plans to send astronauts to Mars around 2035, and MISSION: MARS shows kids how they could start training to join the first crew to the Red Planet! The author, a leading Mars expert, shows the "Future Mars Explorers" the latest designs for spacesuits and exploration rovers. Readers will also learn how to navigate a spaceship, search for alien life, and get an up-close look at some of the world's leading space scientists at work. MISSION: MARS is visually-driven and written in exciting kid-friendly language. It acts as both a training manual and a reference book for future Mars explorers!

Dr. Pascal Lee is chairman of the Mars Institute and a planetary scientist at the SETI Institute. He is also director of the NASA Haughton-Mars Project at NASA Ames Research Center. The project helps plan future human missions to Mars.

Pascal’s interest in space began at an early age. When he was six, he built his first “spaceship” by putting a laundry basket on roller skates. Early test flights, often co-piloted with his younger brother, did not always end well. He refined his skills by studying physics and geology at the University of Paris in France. He continued on with a PhD in astronomy and space sciences at Cornell University in New York.

When not researching ways to advance space exploration, Pascal likes to play with his three dogs and paint space art. He is also a helicopter pilot and flight instructor.