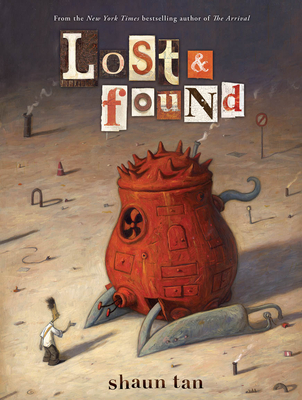 A collection of three jaw-dropping stories: The Red Tree, The Lost Thing, and The Rabbits, by New York Times bestselling author and illustrator Shaun Tan
A girl finds a bright spot in a dark world. A boy leads a strange, lost creature home. And a group of peaceful creatures loses their home to cruel invaders. Three stories, written and illustrated by Shaun Tan, about how we lose and find what matters most to us.

Never widely available in the U.S., these tales are presented in their entirety with new artwork and author's notes.

Shaun Tan is the New York Times bestselling author of The Arrival, Tales from Outer Suburbia, Tales from the Inner City, Rules of Summer, and The Singing Bones. He received the Astrid Lindgren Memorial Award in 2011 and won an Academy Award for the adaptation of his picture book The Lost Thing (from Lost & Found: Three by Shaun Tan). Shaun lives in Melbourne, Australia.

* "These stories representing the visionary work of a master storyteller, illustrator, and designer who cares deeply about his message deserve a place in almost every collection." -- Booklist, starred review

"Shaun Tan rocks my retinas... The book is gorgeously designed, the stories are evocative and mysterious, and every page of Tan's paintings -- I can't bring myself to call them mere illustrations -- commands long moments of study." -- Cleveland Plain Dealer


Praise for The Arrival

"Mesmerizing... Such visual eloquence can only motivate readers to seek out any future graphic novels from Shaun Tan, regardless of where they might be shelved." -- New York Times Book Review

* "A silent, fantastical masterpiece... Filled with both subtlety and grandeur, the book is a unique work that not only fulfills but also expands the potential of its form." -- Booklist, starred review


Praise for Tales from Outer Suburbia

"Tales from Outer Suburbia is not quite like anything else, and that's perhaps the best thing of all about it, opening up reading as a sort of strong, wild and individual activity." -- Chicago Tribune

* "The thoughtful and engaged reader will take from these stories an experience as deep and profound as with anything he has ever read." -- Booklist, starred review

* "Graphic-novel and text enthusiasts alike will be drawn to this breathtaking combination of words and images." -- Kirkus Reviews, starred review