The Storytelling Animal: How Stories Make Us Human (Paperback) 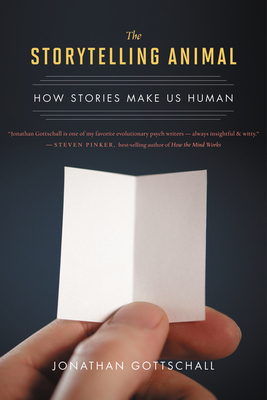 In this delightful and original book, Jonathan Gottschall offers the first unified theory of storytelling. Drawing on neuroscience and evolutionary biology, The Storytelling Animal explores what stories reveal about human nature, how we process information, and think about the world.
Humans live in landscapes of make-believe. We spin fantasies. We devour novels, films, and plays. Even sporting events and criminal trials unfold as narratives. Gottschall argues that stories help us navigate life’s complex social problems — just as flight simulators prepare pilots for difficult situations. Storytelling has evolved, like other behaviors, to ensure our survival. Gottschall tells us what it means to be a storytelling animal and explains how stories can change the world for the better.
We know we are master shapers of story. The Storytelling Animal finally reveals how stories shape us.
A NYTimes.com Editor's Choice
A Los Angeles Times Book Prizes Finalist
“A jaunty, insightful new book . . . [that] draws from disparate corners of history and science to celebrate our compulsion to storify everything around us.”—The New York Times

JONATHAN GOTTSCHALL teaches English at Washington & Jefferson College and is one of the leading figures in the movement toward a more scientific humanities. The author or editor of five scholarly books as well as The Storytelling Animal and The Professor in the Cage, Gottschall's work has been prominently featured in The New York Times Magazine, Scientific American, and The Chronicle of Higher Education, among others. Steven Pinker has called him "a brilliant young scholar" whose writing is "unfailingly clear, witty, and exciting."

An "insightful consideration of all things story."
—Library Journal "A lively pop-science overview of the reasons why we tell stories and why storytelling will endure..[Gottschall's] snapshots of the worlds of psychology, sleep research and virtual reality are larded with sharp anecdotes and jargon-free summaries of current research... Gottschall brings a light tough to knotty psychological matters, and he’s a fine storyteller himself."
—Kirkus Reviews "They say we spend multiple hours immersed in stories every day. Very few of us pause to wonder why. Gottschall lays bare this quirk of our species with deft touches, and he finds that our love of stories is its own story, and one of the grandest tales out there—the story of what it means to be human."
—Sam Kean, author of The Disappearing Spoon: And Other True Tales of Madness, Love, and the History of the World from the Periodic Table of the Elements "Story is not the icing, it’s the cake! Gottschall eloquently tells you ‘how come’ in his well researched new book."
—Peter Guber, CEO, Mandalay Entertainment and author of the #1 New York Times bestseller, Tell To Win "This is a quite wonderful book. It grips the reader with both stories and stories about the telling of stories, then pulls it all together to explain why storytelling is a fundamental human instinct."
— Edward O. Wilson, University Research Professor and Honorary Curator in Entomology, Harvard University "The Storytelling Animal is a delight to read. It's boundlessly interesting, filled with great observations and clever insights about television, books, movies, videogames, dreams, children, madness, evolution, morality, love, and more. And it's beautifully written—fittingly enough, Gottschall is himself a skilled storyteller."
—Paul Bloom, Professor of Psychology at Yale and author of How Pleasure Works "Like the magnificent storytellers past and present who furnish him here with examples and inspiration, Jonathan Gottschall takes a timely and fascinating but possibly forbidding subject — the new brain science and what it can tell us about the human story-making impulse — and makes of it an extraordinary and absorbing intellectual narrative. The scrupulous synthesis of art and science here is masterful; the real-world stakes high; the rewards for the reader numerous, exhilarating, mind-expanding."
—Terry Castle, Walter A. Haas Professor in the Humanities, Stanford University —