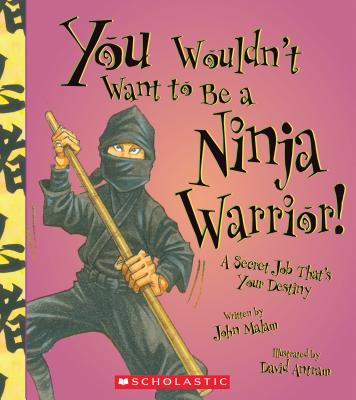 By John Malam, David Antram (Illustrator)
$9.95
Unavailable, Out of Stock, or Out of Print

It's not just a question of learning to fight - a ninja must know how to move without being seen, how to endure boredom and exhaustion, and how to work as part of a team.IThis interactive series will enthrall young and reluctant readers (Ages 8-12) by making them part of the story, inviting them to become the main character. Each book uses humorous illustrations to depict the sometimes dark and horrific side of life during important eras in history. In the mid-16th century, rival warlords are fighting for control of Japan. They need the services of the "shadow warriors" - young men and women who have been trained in the techniques of stealth warfare. Do you have the discipline to become one of them?

John Malam studied archaeology at the University of Birmingham, England, and worked as an archaeologist at historic sites across Britain before becoming a full-time writer. He specializes in children's non-fiction. He has written more than one hundred books, including "An Ancient Greek Temple, Ancient Egyptian Jobs "and "Titanic, Shipwrecks and Sunken Treasure."
Antram was born in Brighton, England. He studied at Eastbourne College of Art and then worked in advertising for 15 years before becoming a full-time artist.