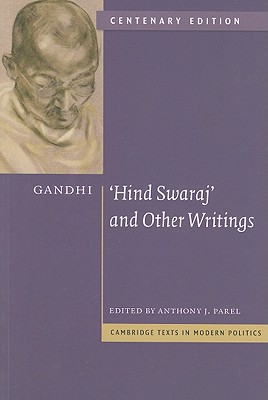 Hind Swaraj is Mahatma Gandhi's fundamental work. Not only is it key to understanding his life and thoughts, but also the politics of South Asia in the first half of the twentieth century. Celebrating 100 years since Hind Swaraj was first published in a newspaper, this centenary edition includes a new Preface and Editor's Introduction, as well as a new chapter on 'Gandhi and the 'Four Canonical Aims of Life''. The volume presents a critical edition of the 1910 text of Hind Swaraj, fully annotated and including Gandhi's own Preface and Foreword (not found in other editions). Anthony J. Parel sets the work in its historical and political contexts and analyses the significance of Gandhi's experiences in England and South Africa. The second part of the volume contains some of Gandhi's other writings, including his correspondence with Tolstoy and Nehru.