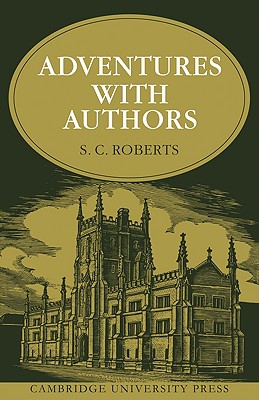 To a wide circle of friends 'S. C.' was known as a vivid raconteur and mimic; more formally he was recognised as a publisher of skill and distinction. He joined Cambridge University Press as assistant secretary in 1911, served four war years in the Suffolk Regiment, with a wound at Ypres, and three years after his return was appointed Secretary of the Press. His adventures and achievements in that capacity are the subject of the main part of this book. His 'Adventures' contain first, a rich collection of his 'stories'. These are not merely comic, though they are certainly that. They are shrewd and sympathetic and they offer a series of insights into human nature, especially in the notoriously delicate relationship between author and publisher. Roberts' 'Authors' include Jeans and Rutherford, Dover Wilson and Granville Barker, Housman and de la Mare and many others. Secondly the book is a record, by one who was at once a participant and a spectator, of the way of life of a major university as it evolved from the Victorian to the modern mode.