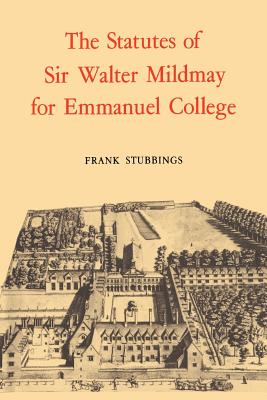 The original Tudor Latin statutes of Emmanuel College, Cambridge, are here translated for the first time by Frank Stubbings, Life Fellow and former Librarian of the College. The College was founded in 1584 by Sir Walter Mildmay, Chancellor of the Exchequer to Queen Elizabeth I. Its prime object was the training of Puritan ministers, and its graduates were prominent in the religious thought and activity of the seventeenth century. In the 1630s many (like John Harvard) emigrated for conscience sake and became a powerfully formative element in early New England. The character of the College is therefore historically important, and the basic document for it is these statutes. Dr Stubbings provides not only explanatory comments, but an introduction which elucidates the Founder's purpose by outlining the history of the University through the religious and social ups and downs of his lifetime. The statutes themselves are no mere dry bones: they tell us not only of dons and undergraduates, but of the Manciple, the cooks, the launderer and the Master's servant. The book includes also the College orders of 1588, supplementary regulations on such everyday matters as mealtimes and student behaviour. The original Latin statutes are printed at the end of the volume.