Tolerance Is a Wasteland: Palestine and the Culture of Denial (Hardcover) 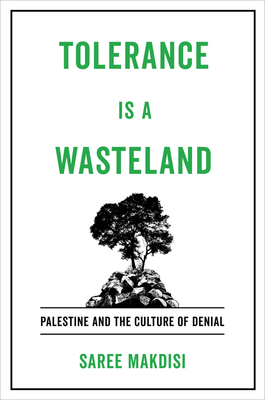 How denial sustains the liberal imagination of a progressive and democratic Israel.

The question that this book aims to answer might seem simple: how can a violent project of dispossession and discrimination be imagined, felt, and profoundly believed in as though it were the exact opposite––an embodiment of sustainability, multicultural tolerance, and democratic idealism? Despite well-documented evidence of racism and human rights abuse, Israel has long been embraced by the most liberal sectors of European and American society as a manifestation of the progressive values of tolerance, plurality, inclusivity, and democracy, and hence a project that can be passionately defended for its lofty ideals.

Tolerance Is a Wasteland argues that the key to this miraculous act of political alchemy is a very specific form of denial. Here the Palestinian presence in, and claim to, Palestine is not simply refused or covered up, but negated in such a way that the act of denial is itself denied. The effects of destruction and repression are reframed, inverted into affirmations of liberal virtues that can be passionately championed. In Tolerance Is a Wasteland, Saree Makdisi explores many such acts of affirmation and denial in a range of venues: from the haunted landscape of thickly planted forests covering the ruins of Palestinian villages forcibly depopulated in 1948; to the theater of "pinkwashing" as Israel presents itself to the world as a gay-friendly haven of cultural inclusion; to the so-called Museum of Tolerance being built on top of the ruins of a Muslim cemetery in Jerusalem, which was methodically desecrated in order to clear the space for this monument to "human dignity." Tolerance Is a Wasteland reveals the system of emotional investments and curated perceptions that makes this massive project of cognitive dissonance possible.

Saree Makdisi is Professor of English and Comparative Literature at UCLA. His previous books include Making England Western: Occidentalism, Race and Imperial Culture; Palestine Inside Out: An Everyday Occupation; and Reading William Blake.