The Emergence of Christian Science in American Religious Life (Paperback) 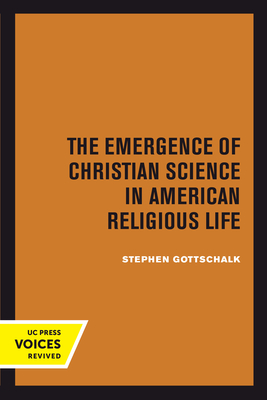 Christian Science is one of only two indigenous American religions, the other being Mormonism. Yet it has not always been examined seriously within the context of the history of religious ideas and the development of American religious life. Stephen Gottschalk fills this void with an examination of Christian Science’s root concepts—the informing vision and the distinctive mission as formulated by its founder, Mary Baker Eddy.

Concentrating on the quarter-century preceding Eddy's death, a period of phenomenal growth for Christian Science, Gottschalk challenges the conventional academic view of the movement as a fringe sect. He finds instead a serious and distinctive, though radical, religious teaching that began to flower just as orthodox Protestantism began to fade. He gives a clear and detailed account of the rancorous controversies between Christian Science and the various mind-cure and occult movements with which it is often associated, and contends that Christian Science appealed to disenchanted Protestants because of its pragmatic quality—a quality that relates it to the mainstream of American culture.

This title is part of UC Press's Voices Revived program, which commemorates University of California Press’s mission to seek out and cultivate the brightest minds and give them voice, reach, and impact. Drawing on a backlist dating to 1893, Voices Revived makes high-quality, peer-reviewed scholarship accessible once again using print-on-demand technology. This title was originally published in 1973.

Stephen Gottschalk was Associate Professor of History at the U.S. Naval Postgraduate School in Monterey, California.