Making It Modern: Essays on the Art of the Now (Hardcover) 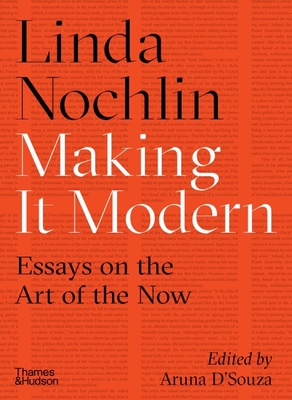 A selection of key essays on art from the nineteenth century to the present day by one of the most influential voices in art history.

This illustrated collection of essays brings together some of art historian Linda Nochlin’s most important writings on modernism and modernity from across her six-decade career. Before the publication of her seminal essay on feminism in art, “Why Have There Been No Great Women Artists?,” she had already firmly established herself as a major practitioner of a politically sophisticated and class-conscious social art history. Nochlin was part of an important cohort of scholars writing on modernity, determined to rethink the narratives of the subject under the pressure of contemporary events such as student uprisings, the women’s liberation movement, and the Vietnam War, with the help of politically engaged literary criticism that was emerging at the same time.

Nochlin embraced Charles Baudelaire’s conviction that modernity is meant to be of one’s time—and that the role of an art historian was to understand the art of the past not only in its own historical context but according to the urgencies of the contemporary world. From academic debates about the nude in the eighteenth century to the work of Robert Gober in the twenty-first, whatever she turned her analytic eye to was conceived as the art of the now. Including seven previously unpublished pieces, this collection highlights the breadth and diversity of Nochlin’s output across the decades, including discussions on colonialism, fashion, and sex.

Linda Nochlin was the Lila Acheson Wallace professor of modern art emerita at New York University’s Institute of Fine Arts. Her publications include The Body in Pieces: The Fragment as a Metaphor of Modernity; Women, Art and Power and Other Essays; The Politics of Vision: Essays on Nineteenth-Century Art and Society; Courbet; Mise`re: The Visual Representation of Misery in the 19th Century; and Women Artists: The Linda Nochlin Reader. Her essay “Why Have There Been No Great Women Artists?” is considered one of the most in influential texts in modern art history.

Aruna D’Souza is an editor, writer, and curator. Her book Whitewalling: Art, Race, and Protest in 3 Acts was named one of the best art books of 2018 by the New York Times.