The Medieval Postcolonial Jew, In and Out of Time (Hardcover) 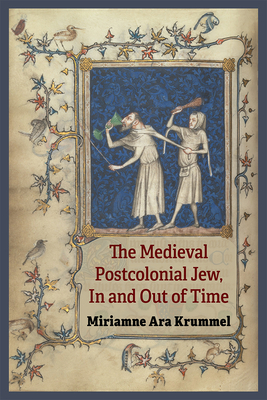 The Medieval Postcolonial Jew, In and Out of Time studies violent temporal clashes that are written into the medieval vision of annus domini [the year of our Lord]. Christian temporality represents Jewish time as queerly oddly outmoded and advocating uncivil and socially disruptive behavior. Jewish temporality, in turn, records a marginalized people who work to rescue their embattled temporality from becoming a time forgotten and colonized. Through a select group of literature in Middle English, Latin, and Hebrew, as well as sixteen manuscript pictorials, author Miriamne Ara Krummel confronts the notion that annus domini time (whether disguised as CE or AD) figures as the universal standard. Krummel’s argument details how Other temporalities—ones outside and not like annus domini time—are cast as nonstandard and imagined as wholly devised out of stories that promote fear and terror, and are positioned as putative threats to the fabric of the temporal empire of Latin Christendom. Ultimately, the book reflects on the ways in which “common” time both marks and silences marginal identities and cultures and shows to what extent the dynamics of the medieval environment materialize in our modern world.

Miriamne Ara Krummel is Professor of Medieval Literature at the University of Dayton.

“An original, edifying, and insightful contribution to our understanding of medieval literary and religious textual traditions and the cultural conditions of their production, dissemination, and reception.”
—Catherine Cox, University of Pittsburgh
— Catherine Cox

"Krummel offers a compelling case for not taking the complexities of time for granted. ...Her work will be of interest to a number of scholars and advanced graduate students interested in literature and postcolonial theory, as well as the history of anti-Judaism and polemic, and perhaps even those invested in interrogating their own pedagogical choices as we employ terms like CE and AD in our classrooms."
—The Medieval Review
— The Medieval Review