Ain't Too Proud to Beg: The Troubled Lives and Enduring Soul of the Temptations (Hardcover) 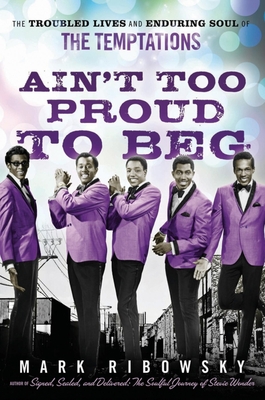 The first and only definitive biography of legendary Motown group, the Temptations

The Temptations are an incomparable soul group, with dozens of chart-topping hits such as My Girl and Papa Was a Rollin Stone. From the sharp suits, stylish choreography, and distinctive vocals that epitomized their onstage triumphs to the personal failings and psycho-dramas that played out behind the scenes, Ain't Too Proud to Beg tells the complete story of this most popular--and tragic--of all Motown super groups.

Based on in-depth research and interviews with founding Temptations member Otis Williams and many others, the book reveals the highly individual, even mutually antagonistic, nature of the group's members. Venturing beyond the money and the fame, it shares the compelling tale of these sometime allies, sometime rivals and reveals the unique dynamic of push and pull and give and take that resulted in musical genius.

Ain't Too Proud to Beg takes a cohesive and penetrating look at the life and enduring legacy of one of the greatest groups in popular music. It is essential reading for fans of the Temptations, music lovers, and anyone interested in the history of American popular culture over the last fifty years.

Mark Ribowsky is the "New York Times" Notable Book author of "The Supremes: A Saga of Motown Dreams, Success, and Betrayal, He's a Rebel: Phil Spector--Rock and Roll's Legendary Producer, Don't Look Back: Stachel Paige in the Shadows of Baseball, " and "Signed, Sealed, Delivered: The Soulful Journey of Stevie Wonder." He has written for "SPORT" magazine and "Inside Sports, " was a staff writer for "TV Guide, " and has been a semi-regular contributor to "Playboy" and "Penthouse." Mr. Ribowsky has been a guest on "Dateline NBC, Primetime Live" (ABC), "Connie Chung, Geraldo Rivera, The Tavis Smiley Show, " and many other network and cable TV shows. He lives in New York.