Philosophy In The Flesh (Paperback) 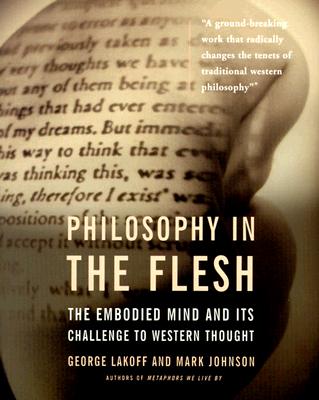 What are human beings like? How is knowledge possible? What is truth? Where do moral values come from? Questions like these have stood at the center of Western philosophy for centuries. In addressing them, philosophers have made certain fundamental assumptions-that we can know our own minds by introspection, that most of our thinking about the world is literal, and that reason is disembodied and universal-that are now called into question by well-established results of cognitive science. It has been shown empirically that: Most thought is unconscious. We have no direct conscious access to the mechanisms of thought and language. Our ideas go by too quickly and at too deep a level for us to observe them in any simple way. Abstract concepts are mostly metaphorical. Much of the subject matter of philosophy, such as the nature of time, morality, causation, the mind, and the self, relies heavily on basic metaphors derived from bodily experience. What is literal in our reasoning about such concepts is minimal and conceptually impoverished. All the richness comes from metaphor. For instance, we have two mutually incompatible metaphors for time, both of which represent it as movement through space: in one it is a flow past us and in the other a spatial dimension we move along. Mind is embodied. Thought requires a body-not in the trivial sense that you need a physical brain to think with, but in the profound sense that the very structure of our thoughts comes from the nature of the body. Nearly all of our unconscious metaphors are based on common bodily experiences. Most of the central themes of the Western philosophical tradition are called into question by these findings. The Cartesian person, with a mind wholly separate from the body, does not exist. The Kantian person, capable of moral action according to the dictates of a universal reason, does not exist. The phenomenological person, capable of knowing his or her mind entirely through introspection alone, does not exist. The utilitarian person, the Chomskian person, the poststructuralist person, the computational person, and the person defined by analytic philosophy all do not exist. Then what does? Lakoff and Johnson show that a philosophy responsible to the science of mind offers radically new and detailed understandings of what a person is. After first describing the philosophical stance that must follow from taking cognitive science seriously, they re-examine the basic concepts of the mind, time, causation, morality, and the self: then they rethink a host of philosophical traditions, from the classical Greeks through Kantian morality through modern analytic philosophy. They reveal the metaphorical structure underlying each mode of thought and show how the metaphysics of each theory flows from its metaphors. Finally, they take on two major issues of twentieth-century philosophy: how we conceive rationality, and how we conceive language.

George Lakoff is professor of linguistics at the University of California at Berkeley, and the coauthor, with Mark Johnson, of Metaphors We Live By. He was one of the founders of the generative semantics movements in linguistics in the 1960s, a founder of the field of cognitive linguistics in the 1970s, and one of the developers of the neural theory of language in the 1980s and '90s. His other books include More Than Cool Reason (with Mark Turner), Women, Fire, and Dangerous Things, and Moral Politics.

Mark Johnson is professor and head of the Philosophy Department at the University of Oregon and is on the executive committee of the Institute of Cognitive and Decision Sciences there. In addition to his books with George Lakoff, he is the editor of an anthology, Philosophical Perspectives on Metaphor.