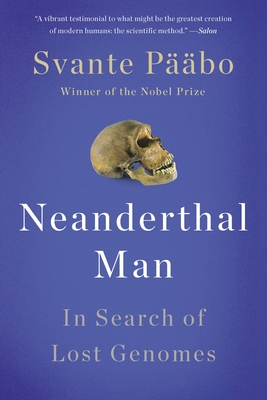 A preeminent geneticist, winner of the 2022 Nobel Prize in medicine, hunts the Neanderthal and Denisovan genomes to answer the biggest question of them all: how did our ancestors become human?

Neanderthal Man tells the riveting personal and scientific story of the quest to use ancient DNA to unlock the secrets of human evolution. Beginning with the study of DNA in Egyptian mummies in the early 1980s and culminating in the sequencing of the Neanderthal genome in 2010, Neanderthal Man describes the events, intrigues, failures, and triumphs of these scientifically rich years through the lens of the pioneer and inventor of the field of ancient DNA, Svante Pääbo. We learn that Neanderthal genes offer a unique window into the lives of our ancient relatives and may hold the key to unlocking the mysteries of where language came from as well as why humans survived while Neanderthals went extinct.

Pääbo redrew our family tree and permanently changed the way we think about who we are and how we got here. For readers of Richard Dawkins, David Reich, and Hope Jahren, Neanderthal Man is the must-read account of how he did it.

Svante Pääbo is the founder of the field of ancient DNA. The director of the department of genetics at the Max Planck Institute for Evolutionary Anthropology in Leipzig, Pääbo has been featured in the New York Times, Newsweek, National Geographic, and the Economist, as well as on NPR, PBS, and BBC. He won the Nobel Prize in Physiology or Medicine in 2022, and in 2009 Time named him one of the 100 Most Influential People in the World. Pääbo lives in Leipzig, Germany.

"Pääbo provides a
riveting, personal account of the development of paleogenetics and the
technical revolution that made the field possible."—Science

"If there is one name associated with ancient DNA, it is Svante Pääbo.... Neanderthal Man is perfectly timed, beautifully written and required reading."—Nature

"Pääbo has provided
us with a fabulous account of three decade of research into ancient DNA, culminating
in 2010 with the publication of the Neanderthal genome."—New York Review of Books

"The world's foremost expert on recovering
ancient DNA tells the inside story of what it took to reconstruct the
Neanderthal genome."—The Christian Century, Essential Books on Evolution and HumanOrigins

"This is a fascinating story of how modern science and especially computer technology is opening vistas onto our prehistoric history."—The Explorers Journal

"Pääbo provides a fascinating look at how his personal life intersected with the founding of a scientific field that has revolutionized evolution."—Science News

"Pääbo paints a picture of
how a major scientific advance rose out of a mix of politics, persuasion,
careful management, and struggles with technology and technique. For that
alone, it's valuable."—Ars Technica

"Scientific understanding of earlier humans is fast evolving. For the nonce, this is a go-to volume on the subject for serious readers."—Library Journal

"[T]his book is a vibrant testimonial to what might be the greatest creation of modern humans: the scientific method." —Salon