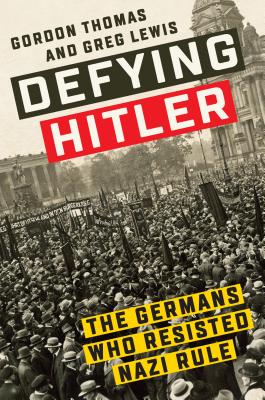 By Gordon Thomas, Greg Lewis
$30.00
Unavailable, Out of Stock, or Out of Print

"A terrifying and timely account of resistance in the face of the greatest of evils.”—Alex Kershaw, New York Times bestselling author of The First Wave

Nazi Germany is remembered as a nation of willing fanatics. But beneath the surface, countless ordinary, everyday Germans actively resisted Hitler. Some passed industrial secrets to Allied spies. Some forged passports to help Jews escape the Reich. For others, resistance was as simple as writing a letter denouncing the rigidity of Nazi law. No matter how small the act, the danger was the same--any display of defiance was met with arrest, interrogation, torture, and even death.

Defying Hitler follows the underground network of Germans who believed standing against the Fuhrer to be more important than their own survival. Their bravery is astonishing--a schoolgirl beheaded by the Gestapo for distributing anti-Nazi fliers; a German American teacher who smuggled military intel to Soviet agents, becoming the only American woman executed by the Nazis; a pacifist philosopher murdered for his role in a plot against Hitler; a young idealist who joined the SS to document their crimes, only to end up, to his horror, an accomplice to the Holocaust. This remarkable account illuminates their struggles, yielding an accessible narrative history with the pace and excitement of a thriller.

Gordon Thomas was a political and investigative journalist in the United Kingdom. A leading expert on intelligence and espionage, his books include the acclaimed Gideon's Spies: The Secret History of the Mossad. He died in 2017.

Greg Lewis is a BAFTA award-winning documentary filmmaker and journalist. He has produced more than sixty documentaries for television and radio in the UK. He is the coauthor, with Gordon Thomas, of Shadow Warriors of World War II: The Daring Women of the OSS and SOE.

“Gripping . . . manages to keep you guessing what some of the outcomes might be, despite our overall knowledge of Germany’s ultimate fate. . . . [Defying Hitler] reminds us all that good people can dare to stand and fight evil and powerful regimes regardless of the odds.”—Pittsburgh Post-Gazette

“The question was often asked amid the ruins of the Third Reich: why did the Germans fight on for so long when all was lost? Those liberated from concentration camps knew the answer. Terror, mass murder, ruthless and barbaric persecution—all opposition had been mercilessly quashed. In Defying Hitler, Gordon Thomas and Greg Lewis show in chilling and vivid detail just how courageous were those who dared to defy Hitler. A terrifying and timely account of resistance in the face of the greatest of evils.”—Alex Kershaw, New York Times bestselling author of Avenue of Spies: A True Story of Terror, Espionage, and One American Family's Heroic Resistance in Nazi-Occupied Paris

“Were the Germans of the 1930s and '40s 'Hitler's Willing Executioners,' in Daniel Jonah Goldhagen's memorable phrase? This important book offers alternative profiles in courage—portraits of the ordinary men and women who resisted Hitler, aided Jews and spied for the Allies during the dark days of World War II.”—Newsday

“[A] well-researched volume that drills into the darkness to examine the lives of those within the Third Reich who actively defied Hitler’s orders from 1933 to 1945, chronicling the major resistance movements such as the White Rose movement and Valkyrie plots as well as lesser-known subversions within the military intelligence circles. . . . Highly recommended for those wishing to comprehend life in Nazi Germany and what courage it took not to surrender to authority. This masterful work will best serve general audiences and historians alike.”—Library Journal (starred review)

“This carefully researched book challenges the myth that the German people were virtually unanimous in support of Hitler. . . . Defying Hitler is filled with almost unbearable suspense and drama.”—Booklist (starred review)

“An engrossing and accessible history of Germans who risked, and mostly lost, their lives opposing the Nazi regime . . . An informative counterpoint to accounts of widespread German complicity with the Holocaust.”—Publishers Weekly

“A deeply researched work that passionately challenges the popular myth that 'the German people followed Hitler as if as one mass, mesmerized like the children of Hamelin by the Pied Piper.'"—Kirkus Reviews