Flatland: A Romance of Many Dimensions (Mass Market) 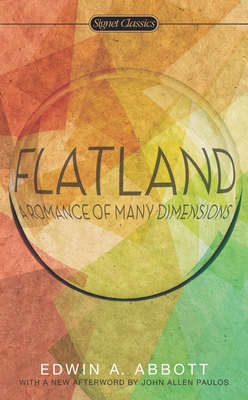 By Edwin A. Abbott, Valerie Smith (Introduction by), John Allen Paulos (Afterword by)
$6.95
On Our Shelves Now

With wry humor and penetrating satire, Flatland takes us on a mind-expanding journey into a different world to give us a new vision of our own. A. Square, the slightly befuddled narrator, is born into a place limited to two dimensions—irrevocably flat—and peopled by a hierarchy of geometrical forms. In a Gulliver-like tour of his bizarre homeland, A. Square spins a fascinating tale of domestic drama and political turmoil, from sex among consenting triangles to the intentional subjugation of Flatland’s females. He tells of visits to Lineland, the world of one dimension, and Pointland, the world of no dimension. But when A. Square dares to speak openly of a third, or even a fourth, dimension, his tragic fate climaxes a brilliant parody of Victorian society. An underground favorite since its publication in England in1884, Flatland is as prophetic a science fiction classic as the works of H. G. Wells, introducing aspects of relativity and hyperspace years before Einstein’s famous theories. And it does so with wonderful, enduring enchantment.

Edwin A. Abbott (1838–1926), a Victorian of great intellect and wit, enjoyed success not only as a writer, but as a scholar, educator, and theologian. Educated at St. John’s College, Cambridge, he was Headmaster of the City of London School from 1865 to 1889. During that time, his progressive belief in the importance of the study of English for every student, even before traditional classic curriculum, led him to write A Shakespearian Grammar (1870) “to help solve most of the difficulties that will present themselves to boys.” It ran to three editions within its first year of publication alone and continues to be a touchstone for Shakespearean scholars. In 1884, he wrote Flatland. First considered by many as merely “a pleasant tonic, and an excellent stimulant for boys,” it was later recognized as a magnificent work of science fiction, as prophetic as those of Jules Verne and H. G. Wells. Retiring to a scholarly life in 1889, he produced numerous other works, including Silanus the Christian (1907), Apologia: An Explanation and Defense (1907), Message of the Son of Man (1909), and Light on the Gospel from an Ancient Poet (Odes of Solomon) (1913).

Valerie M. Smith earned her PhD from the University of Connecticut. An associate professor of English at Quinnipiac University in Hamden, Connecticut, she is currently at work on a manuscript entitled Crossroads: Cultural Autobiography and Imperial Discourse.

John Allen Paulos is a Professor of Mathematics at Temple University and the bestselling author of eight books including Innumeracy, A Mathematician Reads the Newspaper, and Once upon a Number. He has been a columnist for ABCNews.com, Scientific American, and the Guardian, as well as the author of numerous reviews, articles, and op-ed pieces for a variety of publications. Among his many honors are the American Association for the Advancement of Science Award for Promoting Public Understanding of Science and the 2013 Mathematics Communication Award from the Joint Policy Board for Mathematics.