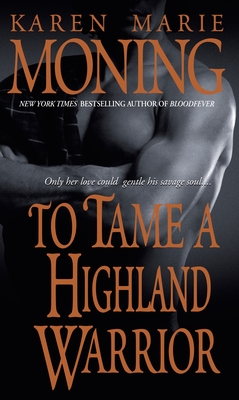 By Karen Marie Moning
$8.99
Unavailable, Out of Stock, or Out of Print

This is book number 2 in the Highlander series.

Only her love could gentle his savage soul—

He was born to a clan of warriors of supernatural strength, but Gavrael McIllioch abandoned his name and his Highland castle, determined to escape the dark fate of his ancestors. Hiding his identity from the relentless rival clan that hunted him, he called himself Grimm to protect the people he cared for, vowing never to acknowledge his love for ravishing Jillian St. Clair. Yet even from afar he watched over her, and when her father sent an urgent summons, "Come for Jillian," he raced to her side—into a competition to win her hand in marriage.

Why had he run from her so many years before? And why return now to see her offered as a prize in her father's manipulative game? Furious, Jillian vowed never to wed. But Grimm was the man she loved, the one who urged her to marry another. He tried to pretend indifference as she tempted him, but he could not deny the fierce desires that compelled him to abduct her from the altar. She was the only woman who could tame the beast that raged within him—even as deadly enemies plotted to destroy them both....

Karen Marie Moning is the internationally bestselling author of the Highlander and Fever novels. Her books have appeared on the New York Times, USA Today, and Publishers Weekly bestseller lists, and have one numerous awards, including the prestigious Rita. She lives in Georgia and Florida with her husband Neil and the world-traveling cat, Moonshadow.

"A hauntingly beautiful love story...Karen Marie Moning gives us an emotional masterpiece that you will want to take out and read again and again."—Rendezvous