Out from Boneville (BONE #1) (Paperback) 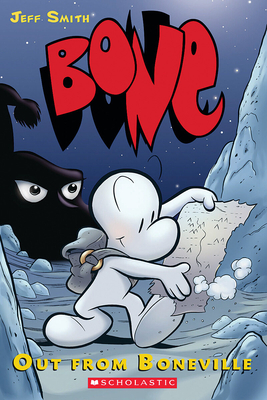 This is book number 1 in the Bone series.

The first book in Jeff Smith's New York Times bestselling, award-winning graphic novel series featuring an unlikely hero who must save an idyllic valley from the forces of evil.

After being run out of Boneville, the three Bone cousins -- Fone Bone, Phoney Bone, and Smiley Bone -- are separated and lost in a vast, uncharted desert. One by one, they find their way into a deep, forested valley filled with wonderful and terrifying creatures. Eventually, the cousins are reunited at a farmstead run by tough Gran'ma Ben and her spirited granddaughter, Thorn. But little do the Bones know, there are dark forces conspiring against them and their adventures are only just beginning!

Jeff Smith is the creator of the award-winning, New York Times bestselling BONE series. He was born and raised in the American Midwest and learned about cartooning from comic strips, comic books, and TV animation. Visit him online at www.boneville.com.

“Charming, character-driven fantasy with an elegant design and masterful story-telling in the tradition of Walt Kelly, Charles Schulz and Carl Barks.” -- PW

“Like Pogo, BONE has whimsy best appreciated by adults, yet kids can enjoy it, too; and like Barks' Disney Duck stories, BONE moves from brash humor to gripping adventure in a single panel.” -- ALA Booklist

“Bone has the multi-level writing and artwork of the best Chuck Jones cartoons or early Disney movies. It's overflowing with subtext about conflicting philosophies of power, cultural imperialism and political responsibility – though not enough to get in the way of its silly fun.” – CMJ New Music Monthly

“One of the best kid's comics ever.” – Vibe Magazine

“Jeff Smith can pace a joke better than almost anyone in comics; his dialogue is delightful -- so are all his people, not to mention his animals, his villains, and even his bugs.” -- Neil Gaiman